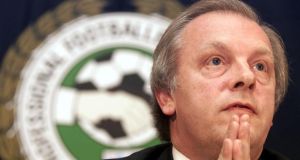 The Professional Footballers’ Association chief executive, Gordon Taylor, has apologised to the Hillsborough families for comparing their campaign for justice to the Ched Evans case.

Speaking to Sky Sports, Taylor said: “The point I was making was not to embarrass or upset anybody at all among the Liverpool supporters. I’m very much an admirer of them and they know that.

“That was never my intention but it was the fact that how things at one time can be perceived one way but come out very differently with the passage of time. If people feel that way [offended] about what I said, I can only apologise.”

Taylor, who has backed Evans to return to professional football after the striker was released having serving half of a five-year sentence for rape, made the apology after he attempted to make a point about miscarriages of justice and compared Evans to the Hillsborough families.

“He [Evans] wouldn’t be the first person or persons to be found guilty and maintain their innocence and then been proven right,” he said. “If we’re talking about things in football we know what happened, what was alleged to have happened, at Hillsborough and it’s now unravelling and we’re finding it was very different to how it was portrayed at the time, indeed by the police at the time.”

On Thursday, Dr Phil Scraton, the academic who was the primary author of the Hillsborough Independent Panel report, wrote to Taylor about what he called his “crass, insensitive and inappropriate” comments.

Scraton, who has written several books on the disaster and who has worked closely with the Hillsborough Family Support Group in making the case for the pivotal Hillsborough Independent Panel review, said drawing a parallel with the institutional failings surrounding the April 1989 disaster demonstrated “not only poor judgement but also extraordinary naivety”.

Scraton added that Taylor’s comments, which came at the end of week long saga that concluded with Oldham Athletic pulling out of a deal to sign Evans, were particularly ill judged given the new inquest into the 96 deaths that is currently ongoing.

“Apart from making such a comment while the new inquests are in session – and you will be well aware of the strict contempt restrictions placed by the Coroner, LJ Goldring on the publication and broadcasting of comment especially regarding liability – to introduce Hillsborough into the volatile public debate regarding Evans’ conviction and his attempt to return to employment as a player is, at best, ill-judged,” said Scraton.

“Drawing Hillsborough into the maelstrom that has surrounded the Evans case, whatever the dynamics of the public debate about the a convicted rapist’s right to employment as a footballer, while suggesting a parallel between these two entirely distinct cases demonstrates not only poor judgement but also extraordinary naivety,” wrote Scraton, who is currently seconded to the legal teams of the families of those killed in the disaster as a special adviser for the duration of the inquests.

“Your comments were made seemingly without consideration of the offence that they would cause to bereaved families and survivors. Given your standing within the game and your public profile, I suggest that you issue a retraction of your comments. It should be accompanied by an apology to the Hillsborough families and survivors for the offence that you have caused during what is a sensitive and painful time as the inquests proceed into their second year.”

After the report of the Hillsborough Independent Panel was published in 2012, the high court ordered a new inquest. That inquest is ongoing in Warrington with families of those who were killed attending to sit through the evidence.

It is not the first time Taylor has faced calls to stand down. In 2013, he survived calls for his resignation following newspaper reports that he had run up gambling debts despite the PFA’s role in helping problem gamblers within the game.