Gareth Southgate will lead England towards the 2018 World Cup and 2020 European Championship after being appointed manager of the national team by the Football Association. Video: Reuters 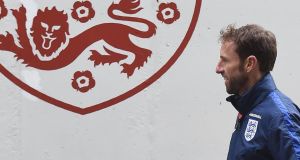 Gareth Southgate has been appointed as the new England manager. Photograph: Getty Images

Gareth Southgate was handed the onerous task of ending England’s decades of under-achievement at major tournaments when he agreed a four-year deal to become national team manager on Wednesday.

The 46-year-old former international defender had been in temporary charge since Sam Allardyce quit 67 days into his reign in September after becoming embroiled in a newspaper sting.

Southgate, who played for Crystal Palace, Aston Villa and Middlesbrough, impressed the FA during four matches as interim manager and was the overwhelming favourite to secure the job.

“I am extremely proud to be appointed England manager. However, I’m also conscious that getting the job is one thing, now I want to do the job successfully,” Southgate said in a statement issued by the English Football Association.

“I’ve thoroughly enjoyed working with the players over these past four games and I think there’s huge potential.

“For me, the hard work starts now. There are ways of working that we need to establish to give ourselves a better chance of success in the future.”

The mild-mannered Southgate’s first game as permanent manger will be away to Germany in a friendly in March before a home 2018 World Cup qualifier a few days later against Lithuania.

It was against Germany that, as a player, Southgate achieved unwanted notoriety for his penalty shootout miss in the semi-finals of the European Championship in 1996 at Wembley.

He later starred in a pizza company TV commercial alongside Stuart Pearce and Chris Waddle wearing a brown paper bag over his head as they teased him over his miss.

England last won a major trophy when they lifted the World Cup at home under Alf Ramsey in 1966 and have not reached the semif-finals of a top international tournament since Euro ‘96.

Southgate’s mission will be to continue the good work he did at the-under 21s now he is in charge of the senior team.

They are already in a good position to reach the World Cup, topping their group after four games with Southgate overseeing wins over Scotland and Malta and a draw with Slovenia.

Southgate’s appointment is no surprise and FA chief executive Martin Glenn described him as a leader and a winner.

“He performed extremely well during the four games he was in temporary charge and he impressed us during a tough interview process,” Glenn said in a statement.

Southgate is the youngest full-time England manager since Steve McClaren was appointed, aged 54, in 2006.

This is only his third permanent role as a manager, having been at the helm of Middlesbrough from 2006-09 until he was sacked the season after they were relegated from the top flight.

He was in charge of England’s under 21s from 2013-16, working with the likes of Harry Kane, John Stones and Raheem Sterling, all of whom are now part of the senior squad.

As a player Southgate earned 57 caps and he will now be expected to bring the passion he had as a player to the job of manager as England bid to return to the international elite.