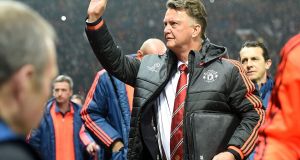 Amid all the rancour and frustration, it has almost seemed to go unnoticed during this jarring spell for Manchester United that Louis van Gaal’s team have now gone seven hours and 45 minutes since anybody scored past them. It is their best run, defensively, since 2008, even if it does not feel like a cause for great jubilation when we have to go back much further to find the last time a manager at Old Trafford faced so much open dissent.

That eruption of anger when Van Gaal removed Anthony Martial during an uptight 1-0 win over CSKA Moscow to put on his “Plan B”, Marouane Fellaini, had been building slowly. “One win in six,” Andy Mitten, the editor of United We Stand, posted on Twitter after the prosaic goalless draw at Crystal Palace last weekend. “No goals scored in four of those games of largely entertainment-free football. It’s nowhere near good enough.”

It also goes further back than just the last half-dozen games if the issue is about the team’s style, and the question of whether Van Gaal has to fit in with United’s traditions or the club have to fit in with him. For now, the answer was provided by the sulphurous reaction to Martial’s removal, and the chants that effectively called into question the Dutchman’s tactics.

Sir Alex Ferguson once banned MUTV, United’s own channel, after one of its presenters had the temerity to express a preference for 4-4-2 rather than 4-5-1. Van Gaal has not reached that stage but he does not like being questioned in this manner and that leaves everything feeling very awkward given the way his philosophy is clearly grating with many fans.

Opta’s statistics show that United have made more backward passes (17%) than any other Premier League club so far this season. They have the lowest percentage when it comes to moving the ball forward (30%) and their ratio of sideways passes is the joint second highest in the league. At the same time, a club renowned for attack-minded football has a team that has taken only 77 shots, lower than every other top-flight side bar Sunderland and barely half as many as Manchester City’s 148.

“The frustration that echoed around Old Trafford was a clear reminder to the manager that they care little for his philosophy, flip charts or percentage of possession,” Iain McCartney, the author of 21 books on United, says. “Victory is important, but so is entertainment. ‘Go out and enjoy yourself’ was Sir Matt Busby’s philosophy and he knew that if his players adhered to his words then the supporters, the people who mattered, would be entertained. Obviously, football today is vastly different from the days of Busby’s great sides, and even those of Ferguson, but that final objective is still the same.”

McCartney has been watching United since the 1960s and his latest book, Building the Dynasty, tells the story about their rise from 1946 through to the Munich air disaster in 1958. He was at Old Trafford on Tuesday and understands the crowd’s exasperation. “Today’s United seldom excite and do little to entice supporters into going to watch them as they are no longer something special,” says McCartney. “Supporters no longer enjoy watching them and teams no longer fear them. Goals win games and excite the fans, not the methodical football that is antagonising the Old Trafford faithful at present.

“Van Gaal has to realise that Manchester United is no ordinary club. Its success and position within the game is based on attacking football and that is something the supporters want to see.”

By now, however, United’s supporters should know enough about Van Gaal to realise that he does not bend for anybody. Van Gaal’s team have risen to the top of their Champions League qualifying group and the discord is not entirely new to him. At Barcelona, there were also times when he could not fully connect with the fans. “His belief in tactical rigour brought him into conflict with many of his players and his inability to relate his ideas to the local media and the fans meant the team always seemed on the verge of imploding,” Maarten Meijer writes in his biography. “His critics depicted him as a kind of footballing zealot, a man wedded to his tactical dogma.”

Similar is happening now, and nobody should expect it to change when Meijer also relays the story of how Van Gaal was once asked whether he had read Ik heb Altijd Gelijk (I am Always Right) by the Dutch author Willem Frederik Hermans. “A catchy title,” Van Gaal said. “But I would never say that about myself. I would add the nuance: ‘I am usually right.’”