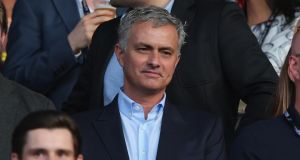 Jose Mourinho the manager of Manchester United looks on during the Soccer Aid 2016 match in aid of UNICEF at Old Trafford over the weekend. Photograph: Alex Livesey/Getty Images

Jose Mourinho suggested Eva Carneiro should work with Chelsea Ladies after she ran on to the pitch during a game with Swansea, the former first-team doctor claims.

The 42-year-old alleges the former Blues manager sexually discriminated against her and is bringing an employment tribunal against him and the club.

Dr Carneiro claims she experienced a number of issues, including a lack of action by Chelsea following sexually explicit chanting at various away games — in particular at Manchester United and West Ham — and a lack of female changing facilities.

She also argues that she was not provided with a club suit, and regularly had to endure sexually explicit comments from her colleagues.

As well as alleging that she was called a “filha da puta” — daughter of a whore — during the Swansea game on August 8th last year, Dr Carneiro says the abuse continued into the dressing rooms.

In her written opening remarks, Mary O’Rourke QC, for Dr Carneiro, submits: “Not understanding the game is a common allegation put to women in the football world.”

On August 10th, Mourinho allegedly told Steve Atkins, head of communications and PR at Chelsea, that he did not want Dr Carneiro on the bench the next match, adding: “She works in academy team or ladies team not with me”.

Ms O’Rourke said: “This is a tale of two employees, one good (Dr Carneiro) and one bad (Mourinho).

“The bad employee forces the good employee out of the job of her dreams and the employer does nothing to stop it.

“The bad employee berates, sexually harassed and demoted the good employee for carrying out her professional duties, namely her health and safety duties as the first team doctor, pitchside.

“Rather then investigation and disciplining the bad employee, the employer allows the bad employee to confirm demotion, but publicly and privately and to continue with his job.

“By comparison, the good employee’s demotion is confirmed and she is instructed to return to work and to ‘build bridges’ with the bad employee.”

However, Chelsea and Mourinho deny she was discriminated against.

Chelsea submitted there were “concerns about her willingness to develop her skills in respect of injury diagnosis and rehabilitation, particularly at the expense of being seen as part of the ‘first team’ and undertaking what she perceived as the more high-profile role of providing on-pitch treatment”.

The respondents claim Dr Carneiro was “preoccupied with developing her profile” and associating herself with the first team in a way discouraged by the club for backroom employees.

This involved signing autographs and having photographs taken with members of the public, nominating a high-profile first-team player when she uploaded a video to YouTube as part of the “Ice Bucket Challenge”, and seeking to position herself behind Mourinho during televised matches.

In its skeleton argument, the club submits: “Contrary to the suggestion that the claimant was uninterested in the media, she twice gave interviews, had discussions about presenting a TV programme, and engaged a digital media consultant (without informing Chelsea).

“Most seriously of all, she secretly briefed against Chelsea to the media, in flagrant breach of the club’s communication policy and disciplinary procedure.”

Referring to claims Mourinho directed sexist Portuguese remarks towards her, Daniel Stilitz QC, for the respondents, wrote: “The suggestion that these remarks were targeted specifically at the claimant, rather than at both Mr Fearn (physio, Jon) and her, is opportunistic and unjustified...

“His comments had nothing to do with gender stereotypes, and it is noteworthy that the claimant’s complaint at the time did not focus on her having been singled out.”

1 World Rugby study advises removal of reset scrums to reduce Covid-19 risk
2 Gerry Thornley: Home and away Six Nations could be its ruination
3 Decision expected next week on staging of College Football game in August
4 Saudi Arabia-funded takeover of Newcastle United in serious doubt
5 Rugby players taking the opportunity to focus on the long game
Real news has value SUBSCRIBE