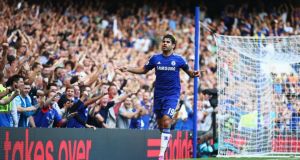 Premier League round-up: Diego Costa hit a hat-trick as Chelsea came from behind to beat Swansea 4-2 and maintain their 100 per cent start to the season.

Swansea took an early lead when John Terry turned Neil Taylor’s cross into his own net but Costa pulled Jose Mourinho’s team level on the stroke of half-time.

The striker added two more in the second half to take his tally to seven goals in four matches and substitute Loic Remy found the net on his Chelsea debut to put Swansea out of sight.

Jonjo Shelvey reduced the deficit late on but it was too little too late as Chelsea returned to the top of the table.

Spurs took the lead in the second minute as Emmanuel Adebayor’s shot was parried and Nacer Chadli pounced on the rebound but Adam Johnson equalised almost immediately with a curling effort.

Christian Eriksen restored Tottenham’s advantage early in the second period but the hosts rescued a point late on when a free-kick diverted off Kane into the net.

Pelle’s first-half double put Saints in charge before Jack Cork made it three after half-time and Morgan Schneiderlin added a fourth to pile the misery on the Magpies.

Romelu Lukaku scored against his former club as Everton claimed their first three points of the campaign with a comfortable 2-0 victory at West Brom.

Lukaku found the net within two minutes and Kevin Mirallas doubled the advantage midway through the second half.

Leicester also registered their first win of the campaign as a superb second-half goal from Leonardo Ulloa gave Nigel Pearson’s side a 1-0 win at Stoke.

Crystal Palace had Julian Speroni to thank for a goalless draw against Burnley as the Eagles goalkeeper kept out a late Scott Arfield penalty.

Palace defender Scott Dann was denied by the woodwork in the first half but it was Arfield who had the best opportunity to win the game, only to see his spot-kick saved.