Dele Alli magic sees Spurs come from behind at Palace 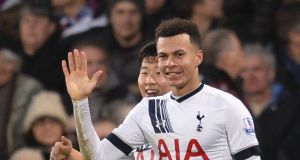 Dele Alli scored a stunner to give Tottenham Hotspur a 2-1 win away at Crystal Palace. Photograph: Afp

Dele Alli scored one of the goals of the season to inspire Tottenham to a 3-1 Premier League victory at Crystal Palace.

With the score at 1-1 in the final 10 minutes after Harry Kane had cancelled out Jan Vertonghen’s own goal, England international Alli further enhanced his growing reputation with a balletic volley to make the score 2-1 and effectively secure all three points.

Substitute Nacer Chadli added a third goal in stoppage time, and with it fourth-placed Spurs strengthened their pursuit of a Champions League place while condemning Palace to a third consecutive defeat.

Spurs boss Mauricio Pochettino had made eight changes to the team that won 2-0 in the FA Cup third round at Leicester on Wednesday, retaining only Son Heung-min, Eric Dier and Christian Eriksen, but they began with intensity and without any apparent disruption.

Watford ended their four-game losing streak in the Barclays Premier League with a much-needed 2-1 victory over Newcastle at Vicarage Road.

Odion Ighalo scored the opening goal of the game just 44 seconds into the second half before Craig Cathcart doubled the home side’s lead shortly before the hour mark.

Jamaal Lascelles pulled one back for the visitors, but the defeat for Newcastle sees Steve McClaren’s side remain in the relegation places while Watford move up to 10th.

Aston Villa’s mini revival continued at West Brom but they were denied a first-half penalty in a goalless draw that stretched their unbeaten run to five games in all competitions.

The Barclays Premier League’s bottom club were unfortunate not to have a spot kick awarded by referee Robert Madley when Jordan Ayew was felled by Jonas Olsson near the byline midway through the first 45 minutes.

In a game of few opportunities, it proved crucial as the Baggies claimed a share of the spoils despite offering little attacking threat at The Hawthorns.

For the fourth time this season Tony Pulis’ side failed to register an attempt on target and not even the second-half introduction of Saido Berahino, who was the match-winner in the reverse fixture, could inspire the hosts in what may prove to be the in-demand forward’s final league game for the club.

Patrick van Aanholt handed Sunderland boss Sam Allardyce the first draw of his 16-game reign as his side fought back to deny Bournemouth victory.

The Black Cats turned in an awful first-half display, but were trailing only by Benik Afobe’s 13th-minute goal when Dutch full-back Van Aanholt levelled in stoppage time before the break to set up a frenzied, but ultimately fruitless, second 45 minutes.

After five wins and 10 defeats, Allardyce was at least able to console himself with some tangible reward on a day when his team for too long failed to reach the standard they set in victory over fellow strugglers Aston Villa and Swansea.

The 61-year-old had admitted before the game that this was one his side could not afford to lose, but the message seemed not to have got through to his players, who turned in a largely insipid first 45 minutes.