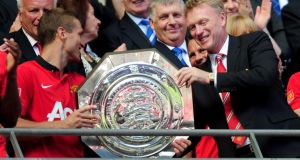 Nemanja Vidic of Manchester United and manager David Moyes with the trophy after victory over Wigan in the FA Community Shield. Photograph: Jamie McDonald/Getty Images

David Moyes insists there is no rift between himself and Manchester United striker Wayne Rooney. And the United manager has restated that the club’s policy is not to sell the disgruntled striker who has been the subject of two bids from Chelsea.

Moyes revisited the subject of Rooney after the United boss had landed the first trophy of his Old Trafford reign with a routine 2-0 victory against Wigan in the Community Shield. In a prickly post-match press conference Moyes also confirmed Rooney would join up with Roy Hodgson’s England squad for Wednesday’s friendly against Scotland at Wembley, despite having been ruled out of all United’s pre-season games, including today, with hamstring and shoulder problems.

Moyes, a fervent Scot, initially was tongue in cheek when he said: “You don’t think I’d send England a fit player, do you.”

But then he attacked some sections of the press for questioning why Rooney, who has been suffering from a shoulder injury, had trained recently with United reserves.

Moyes said: “I spoke to Roy for about two hours at different times. Roy knows the situation. Wayne has trained. Some of you might not like hearing this but I didn’t fall out with Wayne.

“Wayne trained with the reserves because it was his asking. He couldn’t have contact, it was a shoulder injury and we used him as a floating player which means he doesn’t play in either team, he plays between them both. He played as a floating player so he didn’t get injured so anybody who wrote anything else was misleading their readers.”

When asked if United’s policy is that he will not be sold, Moyes replied: “Correct.” He added: “I’m quite enjoying talking about it because I’m hearing so many of you getting it wrong. I want him to join up with England. He trained with us yesterday. He’s not ready. You’ll probably see that in the game. He’ll probably play a chunk of the game but he’s had no football. He’s had 45 minutes against Real Betis in a friendly where he hurt his shoulder.

“Apart from that since he came back for pre-season he’s had no match action. You probably wouldn’t expect somebody in that condiditon to be playing for a long period. He’s coming back, he’s breaking himself back into the team. It will be great for Manchester United because hopefully Wayne will get some playing time. He wasn’t ready for today but he has a chance of being ready for Wednesday.”

United suffered a blow against Wigan when Rafael went off with a hamstring injury which could see him out for a month but Moyes was delighted with the contribution of Robin van Persie, who scored after five minutes with a towering header and then grabbed another in the second half when his shot ricocheted off Wigan’s James Perch and spun past goalkeeper Scott Carson.

Moyes said: “It was a great header, 16 yards on the angle into the side-netting. I’ve been really impressed with Robin.

Moyes was also pleased with the debut of Wilfried Zaha.

“He’s done well in the pre-season games and he’s going to develop,” said Moyes. “There will be times when he is up and down but it was a great opportunity for him to get on the pitch and be a part of Manchester United.”

Moyes, however, was reluctant to take praise for the trophy. He said: “I class that as another piece of silverware for Sir Alex (Ferguson) really. It was his team that won the Premier League last season so I see today as for Sir Alex. The ones going forward will be down to me.”