Damien Duff to travel further afield before returning to Ireland 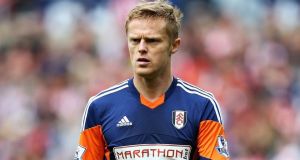 Fulham winger Damien Duff is currently recovering from a knee operation and does not expect to play in the Premier League again. Photograph: Getty.

Damien Duff appears to have played his last game in the Premier League with the 35-year-old Dubliner confirming that he will leave Fulham at the end of the season after which he hopes to play further afield, quite possibly in the MLS, before he returns to Ireland to wrap up his career and settle down with his family.

The long-time Ireland international told The Irish Times yesterday that he is starting to weigh up his options for next season but that his immediate priority is to complete the recovery from a knee operation he underwent after having sustained medial ligament damage in training back in February.

“I’ve had a few whispers from here and there but I’m just trying to get this (his knee) right first. I’ve looked at the Australia or America thing for a bit, it would be a different way of life, a different league; I think life’s too short just to be stuck in the rat race, if that’s the right phrase, over here so I’d maybe like to taste something new before I go back home.”

Asked whether Robbie Keane has recommended a switch to MLS to him, he said: “We’ve had a bit of banter alright. He obviously loves it and every six months I see he’s signed a new deal so he’ll be there for a good while yet.

“We’ll see what happens but I wouldn’t mind trying it to be fair but I have to get back fit first, I’ve got a screw in my knee now and a screw in the knee of a jinky winger doesn’t really go hand in hand . . . but we’ll see what happens. We’d be up for it and we’d like to see the world but it wouldn’t be for a jolly up. I’m still as hungry as ever.”

Duff previously spoke about his desire to return to Ireland last year at a promotional event for Heart Children Ireland, a charity with which he has worked as an ambassador (his own son Woody was born with a small hole in his heart) and he insists that is still his intention even if his route back to Dublin involves a bit of a detour.

“Everybody knows I want to go back and play in Ireland,” he says, “but whether that’s this summer I don’t know. My body feels good so I’d like to do a year or two elsewhere first.”

The former Chelsea star, who made the last of his 18 appearances this season in early February in the FA Cup against Sheffield United, is hopeful that his current club can manage to avoid relegation after winning three of their last five league games.

Big chance
“Saturday (when they beat Norwich) was massive and I think we have a big chance at this stage after the last week and the two results (they also beat Newcastle and Aston Villa). The place is buzzing, that’s what it’s like at football clubs when you get results.”

He believes his old club may lose out to Liverpool in the title race but that they are capable of springing a surprise and winning the Champions League if only because of Josè Mourinho, who he describes as the “best coach I ever worked with”.

“Just because he’s there I don’t think you can rule them out,” he says of the Stamford Bridge club where he spent three successful seasons. “The striker situation is worse than ever for me and he’s got them up there challenging and that for me is just down to him.

“Maybe the league might be a bit of a push; I think Liverpool just look like they’re steamrolling teams but the Champions League? I wouldn’t be surprised.”