Moments of the year: We’ll always have Cardiff despite Danish pasting 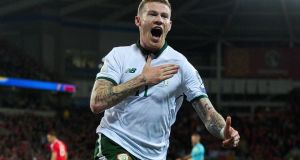 It’s hard, on the one hand, to imagine many of the contenders for next summer’s World Cup having been paid too much attention to Ireland’s game against Wales in October; Lionel Messi is unlikely to lie awake at night wondering whether it might be Ashley Davies or Shane Duffy he is leaving for dead by the banks of the Don. And yet, one suspects, if there were life on Mars it would have known something momentous had occurred at the Cardiff City Stadium; the sound of the home side’s bubble being burst must surely have been audible in space.

It may seem a little infantile to take such pleasure in having been there to see Chris Coleman, his players and the almost 30,000 strong crowd-cum-choir who set spines tingling with their pre-match a cappella rendition of Hen Wlad Fy Nhadau, but very little in life has as aggravating an effect as feeling dismissed and the air of expectation was heavy that night; the confidence was almost dripping down the walls.

Wales, of course, did not have a great campaign; they wouldn’t have been left needing a draw while hoping for a win and some wildly unlikely favour from Georgia if they had lived up to their own hype post Euro2016 but results at the tournament had, despite the two sides not meeting, certainly provided a measure of where they stood with regard to Ireland. On July 1st, Coleman’s men demolished a Belgium side that had utterly dismantled Séamus Coleman and co less than two weeks earlier.

Still, there seemed a casual disregard for the fact that the Irish had previously knocked out some big results when in a tight corner. Germany and Italy stood out but the home side’s status as European Championship semi-finalists had the effect of putting this on something of a par.

Of course, there was something slightly shameful about it too. Scoring with one of your only two shots on target while digging in in defence is fine against the world champions, in fact to hear Joachim Löw moan about the injustice of Germany’s defeat in Dublin somehow added to the joy of it all. Heading to Cardiff in the hope of out-muscling a side that should really be no better than us is another thing altogether but then, needs must and the battering of Joe Allen aside, perhaps, you could only admire the way Ireland executed their gameplan that night.

There are a couple of contenders for this one although the hammering at home by Denmark is the game that will endure longest in the memories of those who were there to witness it.

Martin O’Neill gambled and looked to be losing when he doubled down and pretty much had his ass handed to him by his old friend Age Hareide. The warmth between the two had been obvious beforehand but the Norwegian may have forgotten himself slightly when he cheerily thanked Ireland afterwards for the way in which they had allowed his side to play.

O’Neill’s assistant, Roy Keane, probably has a lot to answer for when it comes to the development of a culture in which it is deemed unacceptable to suggest that the team that won had simply been the better one but Ireland’s shortcomings here, both technical and tactical, did much to accentuate the gap.

Okay, Christian Eriksen played his part too and a few of his team-mates were better than any Irishman on the pitch that night but worse, much worse than the defeat, was the crushing sense that if this Irish team were a club side then it would be the starting point for some manager’s “project”.

As it is, O’Neill will stay and he has done enough over the course of his four years at the helm to earn another deal but the manner and scale of this defeat has certainly left him rather less room for trumpet blowing. It was hard, in fact, to find anyone in the days immediately afterwards who cared too much whether or not he hung around for the next campaign.