Atlético Madrid a tough assignment for callow, inexperienced side 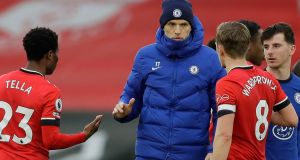 It has not taken Chelsea’s forwards long to discover that Thomas Tuchel is not a patient man when something goes wrong in the final third.

Tuchel is not afraid to show his irritation during games and he was an angsty presence throughout Chelsea’s draw with Southampton, flinging his arms in the air when moves broke down and even digging out individuals for stalling attacks with bad choices.

The demands from Chelsea’s new manager are high, as Callum Hudson-Odoi discovered when he was substituted in the 76th minute after being introduced at half-time.

Tuchel craves perfection and Hudson-Odoi, whose attitude and energy was questioned by his manager, was not alone in disappointing. Timo Werner also copped an earful at times, particularly when he overhit a simple pass to Marcos Alonso in the 17th minute.

It has become a common sight since Tuchel replaced Frank Lampard last month. The defence has improved but the attack remains imprecise. There are still too many rushed decisions from forwards who should be capable of so much more.

Tuchel has felt the frustration rising and although Mason Mount has been a bright spot, Chelsea are still struggling to convert the few chances they do make, which hardly bodes well before they try to find a way past Atlético Madrid when they meet Diego Simeone’s side in the last 16 of the Champions League tonight.

Atlético, who top La Liga, do not give up chances easily. It promises to be the ultimate test of Chelsea’s lock-picking skills. Atlético relish the big European nights and their ability to shut a game down is a concern for Tuchel, whose side have scored nine goals in his first seven games.

It was not supposed to be this way when Chelsea spent heavily last summer, signing Werner, Kai Havertz and Hakim Ziyech. Their attack looked scintillating. Chelsea, who had finally found replacements for Eden Hazard and Diego Costa, would surely be one of the most exciting teams around.

Like Lampard before him, though, Tuchel is yet to find the right blend. Changing to a 3-4-3 system has helped Werner and Hudson-Odoi has mostly impressed as an attacking right wing-back, allowing Chelsea to overload teams at times. Yet the work is far from done.

There was a lot of aimless possession against Southampton and Tuchel was infuriated by his side’s erratic final pass. Werner was ineffective despite ending his goal drought against Newcastle last week and there was a collective lack of creativity aside from Mount, who won and scored Chelsea’s equalising penalty.

The issue is that Mount is not ready to carry the team on his own. The 22-year-old is far from the finished article and he was not faultless against Southampton, ruining an early attack with a poor pass to Reece James. More often than not, though, Mount is the player who drives Chelsea on.

The problems lie elsewhere and Tuchel is faced with a conundrum that goes beyond reviving Werner, who is more at ease playing as an inside-left forward than operating through the middle. There is a reason why Chelsea could bring in another striker this summer, with Borussia Dortmund’s Erling Braut Haaland under consideration. Tuchel has concerns over Tammy Abraham’s general play and has twice substituted the forward at half-time, while Olivier Giroud is out of contract at the end of the season.

But while Werner has not turned out to be the ruthless No 9 Chelsea have needed since selling Costa in 2017, Tuchel still has an embarrassment of riches in attack. It is time for Havertz to show why he was so coveted at Bayer Leverkusen, Ziyech to bring the creativity that helped Ajax reach the last four two years ago and Christian Pulisic to rediscover last season’s dynamic wing play.

At the moment, though, it is all talk. Chelsea still look callow, their inexperienced typified by Hudson-Odoi’s struggle to adapt to Tuchel’s demands about counter-pressing when he played as a number 10 rather than a wing-back against Southampton.

Hudson-Odoi, Pulisic and Havertz are all in their early 20s, so this is a work in progress, and injuries have also been a factor this season. It has been tough for anyone to build consistency. Ziyech, for instance, has gone from making the side tick under Lampard to starting only twice for Tuchel.

In a way the Moroccan’s struggles sum up the challenge for Chelsea. Although there will be no room for excuses against Atlético, the attack is still more a collection of extremely talented individuals than a cohesive and ruthless unit. No wonder Tuchel has struggled to contain his emotions.