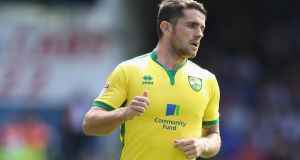 Robbie Brady scored his third goal of the season for Norwich on Saturday. Photograph: Getty Images

Norwich halted their miserable run in emphatic fashion as they beat Brentford 5-0 in their Sky Bet Championship encounter at Carrow Road.

The Canaries had lost their previous five league games, but Jacob Murphy and Graham Dorrans put them 2-0 up inside 16 minutes, the latter scoring from the rebound after his penalty for Harlee Dean’s foul on the former had been saved by Daniel Bentley.

Republic of Ireland international Robbie Brady then put the game beyond Brentford in the 59th minute before goals from Nelson Oliveira (79) and Alex Pritchard (88) ensured Norwich’s biggest league win of the season.

This was Brady’s third goal of the current campaign.

Kemar Roofe scored his first goal for Leeds as a 2-0 home win against Aston Villa lifted them up to fourth in the table.

Roofe, signed in the summer from Oxford and who hit the post for Leeds in their midweek EFL Cup defeat at Liverpool, finally ended his 22-game goal drought by heading home Souleymane Doukara’s cross to break the deadlock in the 68th minute at Elland Road.

Chris Wood added his 10th of the season in stoppage time as Villa chased a late equaliser in a game that kicked off at 5.30pm, but the visitors slipped to their first defeat in eight games under manager Steve Bruce.

Brighton missed the chance to go top and finished the game with 10 men as they were held to a goalless draw at Cardiff.

Chris Hughton’s side extended their unbeaten league run to 11 matches, but the point was not enough and defender Gaetan Bong was dismissed in stoppage time for his second yellow card.

Third-placed Reading slipped to their heaviest defeat of the season, losing 5-0 at Fulham.

Sone Aluko and Johansen struck for the Cottagers within the space of three minutes midway through the second half before Martin added his second in the final minute as Reading’s four-game winning run crashed to a halt.

Preston team-mates Eoin Doyle and Jermaine Beckford were sent off after an angry exchange towards the end of their 2-1 defeat at Sheffield Wednesday, who moved back into the top six.

Fernando Forestieri headed Wednesday into a ninth-minute lead but was shown a straight red card in the 65th minute following an off-the-ball incident involving Beckford.

Steven Fletcher doubled Wednesday’s lead from the penalty spot before Doyle pulled one back for Preston with eight minutes left.

But Preston’s hopes were dashed when he was sent off along with Beckford for violent conduct.

Birmingham began the day in fourth place but like the teams above them they too came unstuck as they slipped to a surprise 3-0 home defeat to Barnsley.

Blues hit the woodwork twice through David Davis and David Cotterill after Marc Roberts’ header had given Barnsley the lead and Sam Winnall struck twice with late headers.

Huddersfield slipped to eighth after their 1-1 draw at improving Blackburn.

Derby maintained their climb up the table by winning 1-0 at Wigan for their fifth straight league victory.

Bristol City snapped a three-game losing run with a 2-0 win against Ipswich at Ashton Gate.

Managerless Rotherham’s woes continued as a 2-1 defeat at Burton extended their winless league run to 15 matches.

Australia international Jackson Irvine gave Burton a first-half lead and Matt Palmer made it 2-0 soon after the hour mark.

Tom Adeyemi struck for the Millers in stoppage time, but they have now lost 11 of their last 12 games in the Championship.