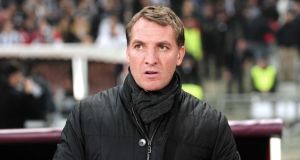 Liverpool boss Brendan Rodgers was left to rue his side’s lack of cutting edge as they were knocked out of the Europa League on penalties by besiktas. Photograph: AFP

Brendan Rodgers was left to rue Liverpool’s lack of cutting edge against Besiktas as his team exited the Europa League via a penalty shootout defeat.

Tolgay Arslan levelled the tie with a 71st-minute winner for Slaven Bilic’s team and Demba Ba missed a glorious chance to settle the contest in normal time when he struck the crossbar from six yards in the 91st minute. But Liverpool wasted several good openings in a comfortable first-half performance and paid the price when Besitkas staged a late rally.

Dejan Lovren missed the 10th and final penalty of the shootout after nine successful conversions, condemning Liverpool to their first defeat in four European penalty competitions and only their third in 15 in total.

The Liverpool manager said: “We are disappointed to go out in the manner we did. I thought we created lots of opportunities in the first half to make it really difficult for them, we defended very well, limited them to very few chances, but we were punished for the one where we were too deep. We sat off just a fraction and they scored. I am proud of the team, it was a fantastic atmosphere. We are disappointed having put so much into the game.”

Rodgers handed Mario Balotelli a first start since 8 November alongside Daniel Sturridge, who endured a difficult night, in an attempt to build on last week’s 1-0 win at Anfield.

Rodgers added: “We didn’t come to lose, we came to win. It was a good game, not much in the game and the pitch was very difficult for both teams. For us we now just have to concentrate on a league campaign that is going very well for us now, and we have another cup competition – that was always the aim for us, to do well in a cup competition this season.

“I think up until they scored we were quite comfortable in the game. We were away from home and the objective was to keep a clean sheet.

“We created chances in the first half and were comfortable in the second. We were missing a lot of our creativity in the team but that is no excuse.

“We had a young side – we had an attacking line-up with two strikers and it was always a tight game. They didn’t come at us much, we just didn’t make the most of the opportunities we did have.”

Lovren has had a difficult start to his Liverpool career since a £20m summer move from Southampton but Rodgers insisted the Croat could not be blamed for the team’s European exit.

He said: “Dejan was happy to take a penalty. The five penalty-takers were all confident. The four before had experience in a penalty competition earlier this season and they were confident. I feel sorry for him because he had played really well in the game, but someone has to miss and unfortunately it was us.”

Rodgers was gracious in defeat, adding: “Good luck to Besiktas and their supporters. Unfortunately it hasn’t been a good place for us this time in the Ataturk, but the atmosphere was fantastic and we really enjoyed it here.”

1 Golf in Level 5 Covid restrictions: Clubs still waiting to hear if they can remain open
2 Gordon D’Arcy: Ireland don’t need to do a Finn Russell on it
3 CJ Stander ready for Italy after lockdown sheep battles
4 Hugo Keenan could start in changed Ireland team against Italy
5 Marcus Rashford is Man United’s hero in the Paris rain again
Real news has value SUBSCRIBE