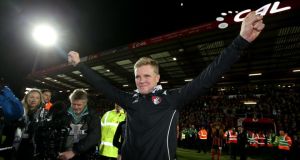 club’s forerunner. Now that would be an antidote to the Premier League’s endless talk of clubs being global brands.

Even as things stand, though, Bournemouth’s is a pretty decent yarn. After some 125 years in existence, this was just the club’s fifth in the second tier of English football and promotion means that having come within a whisker of extinction seven years ago for the want of £4 million (€5.5 million), they’ll be guaranteed at least 25 times that in prize money next season alone.

The full houses at Dean Court will contribute a few bob too but given that the capacity is barely 12,000, gate receipts might suddenly start to feel like loose change for the Cherries.

The ground boasts a “Legends’ lounge” but the name is based on a fairly localised interpretation of the word. Dickie Dowsett is a legend in those parts . . . and Ted McDougall. George Best is the most famous player ever to wear the shirt but the Belfast man only swung by for five games between equally forgettable stints at Hong Kong Rangers and Brisbane Lions.

In short, they might well replace the lot of them with this year’s team in years to come.

In part because of the fitness issues, then manager Kevin Bond offered him the chance to do some coaching but things at the club were chaotic and at one stage the supporters had to get the collection boxes out again just to keep things going. When a new consortium took over the club, the man who led it “saw something in me”, Howe says, and offered him the chance to take charge of the first team.

He was 31 years old and recalls being convinced he was not up to the job but he took it and, with the sort of industry and determination that have since become trademarks, set about making a go of it.

The team started his first full season in charge in League Two with a 17-point deduction as a result of all the financial problems, but he kept them up by nine and followed it up with automatic promotion.

“That first six months in management when we managed to stay up felt like about five years,” he recalled recently.

“With players not getting paid, the bailiffs turning up, having no training pitch, trying to find ways to do things with no money, it was really difficult. Then add the next season on when we had a year-long transfer embargo and couldn’t sign any players – and we got promotion with that squad.”

The scale of the owner’s wealth is not really known but it is safe to say the £850,000 he paid to take charge didn’t trouble him much. His involvement has taken some of the shine off the story for some but the last published accounts show him having funded a loss of just over £15 million; decent money at that level but not the sort of bankroll that tips the scales irresistibly in a club’s favour, even in the Championship.

Howe, as it happens, is about to discover what it feels like to compete with clubs precisely like that.

BBC to draw from well of nostalgia during barren months 20:50
Health official says decision to hold Liverpool-Atlético game was wrong 19:12
‘There may be no more tennis this year’, says Wimbledon chief Lewis 18:54
Only a matter of time before British Open bites the dust 18:24
Even 60 years on, French rugby tome still holds water 18:00