Berbatov proves his worth as Fulham win 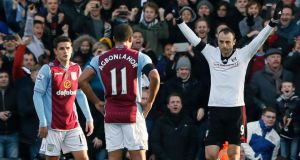 The spot-kick finish was just Berbatov’s second league goal in 13 appearances this term, and it secured Rene Meulensteen’s first win in sole charge.

Should Berbatov sustain the form shown in the first half here, new boss Meulensteen’s chances of dragging Fulham clear of relegation danger will increase dramatically.

It was a shocking mistake from the Villa full back that condemned Paul Lambert’s men to a miserable 2-0 half-time deficit.

The Midlanders were never able to find their stride, eventually suffering their first defeat in six league matches.

Before this clash Lambert’s men held the second-best run of Premier League form behind Everton.

Now they are left to rue the continued indifferent form of striker Christian Benteke, whose barren run stretched to nine games.

Fulham recorded their first clean sheet since the 1-0 Stoke victory on October 5th, holding out under what precious second-half pressure Villa could muster.

Wherever Berbatov ends up by February, he proved his short-term Fulham commitment at least in an engaging first half.

Both focal point and defence opener, this was the former Manchester United striker at his best.

Just eight minutes in he nodded in a smart header that Brad Guzan had to touch on to the bar.

Berbatov had fallen as though pole-axed moments earlier, rightly unsuccessful in a penalty shout.

Even before that Giorgios Karagounis’ chipped pass was cut out at the last, and Scott Parker’s through-ball nearly set John Arne Riise clear.

Fulham had Villa pegged back into their own half for the opening 10 minutes, but Lambert’s men were always going to be dangerous on the break.

The Belgium forward hit the target after 20 minutes with a rasping shot from the edge of the box, but it was straight at Stekelenburg and the Fulham stopper parried with ease.

That spurred the home side back into action, with Ashkan Dejagah racing clear, but unable to pull the trigger.

Kaciniklic’s resulting effort was cleared off the line as Fulham cranked up the pressure.

And then Meulensteen’s men struck.

Berbatov’s cushioned header allowed Dejagah to send the onrushing Sidwell into the box, and the recalled midfielder clipped into the net at full stretch.

If Villa were stunned by their inability to gain a foothold, manager Lambert would have been furious with Bacuna for conceding a soft penalty just before the half-hour mark.

Berbatov sent Kaciniklic clear with a superb ball, but Fulham’s number 11 ran slightly too wide for a clear shot at goal.

Well aware of his error, Kaciniklic delayed long enough for Bacuna to race in, and bundle him to the turf.

Agbonlahor wasted a fine opening for Villa right at the start of the second half, letting a neat square ball stray across his path when he should have struck it first time.

Philippe Senderos struck a firm header goalwards after a well-worked Fulham corner, but Guzan was equal to the effort.

Riise was forced to nod round the far post in defence after an Agbonlahor cross, but it was slim pickings for Villa.

Norway full back Riise then headed against the post from a smart Karagounis cross.

Back in the ascendancy, Fulham sought a third to kill off the contest.

But Sidwell was unable to put even a toe to Dejagah’s low right-wing cross.

Villa never found fluency in this tie, Karim El Ahmadi and Andreas Weimann’s near-collision in the Fulham box summing up a galling day.

Fulham will simply not care though, buoyed hugely by three crucial points and lift-off for the Meulensteen era.