Arter scores as Bournemouth go up as champions 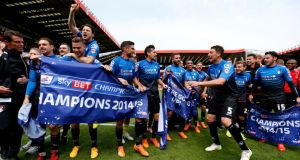 Bournemouth are promoted as Championship winners after Watford could only draw 1-1 with Sheffield Wednesday. Photograph: Getty

Derby saw their play-off hopes crushed by out-of-form Reading who ended a run of four Championship defeats by pulling off a shock 3-0 win at the iPro Stadium.

Derby’s vastly superior goal difference meant they only needed a point to seal a top six finish but they went behind in only the second minute.

Brentford sneaked into the Sky Bet Championship play-offs on another final day of drama at Griffin Park.

Alex Pritchard, Jota and Andre Gray were on target to secure a 3-0 win over relegated Wigan, while results elsewhere played right into the Bees’ hands.

Having kicked off in seventh place, they needed a little help from their friends, and Reading — their neighbours from just along the M4 — obliged by beating Derby while former Brentford loanee Jordan Rhodes was on target as Blackburn sank Ipswich.

Therefore the Bees, famously denied automatic promotion from League One by Marcello Trotta’s penalty miss two seasons ago, were on the right end of events for a change to secure fifth place and keep their Barclays Premier League dreams alive.

It also keeps Mark Warburton in a job for another couple of weeks at least, with the manager leaving at the end of the season even if he guides them to back-to-back promotions.

For now, Middlesbrough await in the two-legged semi-finals.

Bournemouth celebrated a comfortable 3-0 over Charlton which saw them crowned champions as they confirmed their promotion to the Premier League in style.

Two goals from Matt Ritchie and one from Harry Arter saw off the mid-table Addicks on their home turf, who were outclassed from the off and were two down within 12 minutes.

And there was a surprise at the end when news of a last-gasp equaliser for Sheffield Wednesday at Watford meant Eddie Howe’s free-scoring side had also climbed above the Hornets into pole position.

Watford were denied the Championship title after a last-gasp Atdhe Nuhiu equaliser earned Sheffield Wednesday a 1-1 draw at Vicarage Road to ensure Bournemouth were crowned champions.

Having secured promotion last week following a 2-0 victory at Brighton, and subsequent results involving Middlesbrough and Norwich City going their way, the Hornets knew they simply had to match or better what the Cherries achieved at Charlton Athletic to go up as champions.

One goal from Matej Vydra — his 16th of the season — looked to have been enough but Watford had several other fine opportunities to make what was a comfortable victory more reflective of their dominance against the Owls.

They were opportunities they were to regret not taking because although they were in complete control, they were to be undone when Nuhiu headed home after the Hornets had failed to clear their lines from a late free-kick.

Ipswich’s play-off hopes were given an almighty fright as they lost 3-2 to Blackburn but scraped into the top six on goal difference, with arch-rivals Norwich now awaiting them.

Mick McCarthy’s side began the afternoon in fifth place with a three-point cushion to seventh and could hardly have started better at Ewood Park with Daryl Murphy volleying them ahead after just two minutes.

But Jordan Rhodes and Craig Conway struck before half-time to put Blackburn 2-1 up and with results elsewhere, Ipswich dropped to sixth, hanging on courtesy of goal difference.

Rudy Gestede made it 3-1 from close range in the second half to shred the nerves of the visiting fans, whose side fought frantically to get back in the game.

They hit a second through Murphy’s late penalty — his 27th goal of the season — and, although they could not draw level, any worries were alleviated with a loud cheer from the visiting end signalled Derby’s capitulation.

Ipswich have only won two of their last 10 away from home but will not care after securing a mouth-watering play-off tie with Norwich.