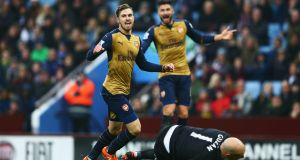 Seventeen years ago to the day Aston Villa were 2-0 down at home against Arsenal at half-time and came back to win 3-2. While the scoreline was the same at the interval here, history never looked like repeating itself as Arsenal took their place at the Premier League summit and condemned Villa to a defeat that leaves them looking desperately lonely at the other end of the table.

Olivier Giroud’s 50th Premier League goal, via a penalty kick after a strange piece of refereeing from Kevin Friend, gave Arsenal the platform for a victory that was effectively wrapped up when Aaron Ramsey broke away and added a second seven minutes before half-time following yet another Mesut Özil assist. It was a superb team goal and emphasised the chasm in class.

Villa, to their credit, improved in the second half but the damage was done and there was no way back for a team that looks destined to start next season in the Championship. They have now gone a club-record 15 league games without a win, remain eight points adrift of safety, and Rémi Garde could be forgiven for privately wishing that Arsène Wenger, his old mentor, had talked him out of, and not into, this thankless job.

As for Arsenal, this was the sort of game that they have to win if they are going to mount a legitimate title challenge. At times, especially in the second half, they seemed to be playing within themselves, yet there was always a feeling that Wenger’s team could go through the gears. Özil, who has now created 13 Premier League goals this season, showed some splendid touches, Giroud followed his midweek hat-trick against Olympiakos with another goal and Ramsey never stopped running.

Bereft of confidence, the last thing Villa needed was to concede early, yet they were behind within eight minutes and from that moment on the outcome of the match was never in doubt. Giroud’s opener arrived in slightly odd circumstances and only Friend knows why he took so long to point to the spot after Theo Walcott, running onto Mathieu Flamini’s inviting pass, was pulled back by Alan Hutton and then bundled over for good measure.

Stood no more than 10 yards from the incident, Friend could not have taken up a better position and it was curious how he retreated initially, prompting a protest from Walcott, before then pointing to the spot. There was no indication that Friend received any assistance from the assistant referee covering that end of the pitch – the official was stood 60 yards away on the opposite touchline – and it can only be assumed that the referee reconsidered his own decision.

Either way, Friend got it right in the end, the penalty was given and Giroud, sending Brad Guzan the wrong way, dispatched his kick with the minimum of fuss. Wenger’s side spent the next half an hour controlling possession for long periods without threatening too much, although Giroud did come close to adding a second when he met Özil’s free-kick with a glancing header only for Rudy Gestede to nod clear.

The visitors were almost toying with Villa and it was no surprise when they doubled their lead. The goal was a beauty, started and finished by Ramsey in a breathtaking piece of freeflowing football that showed Arsenal at their best and left Villa wondering what the hell had hit them.

Ramsey, deep inside his own half, robbed Idrissa Gana and Giroud nudged the ball onto Özil, who quickly found Walcott. Villa were wide open and Arsenal sensed blood. Cutting in from the left, Walcott threaded a lovely pass into the path of Özil, who was breaking in the inside right channel, and the German could have decided to go it alone. Instead, Özil unselfishly squared for Ramsey, who had charged from one end of the pitch to the other, to sweep home.

Frustrated with Friend’s refereeing as much as their team in the first half, Villa supporters finally had something to cheer after the restart.

Playing with much more intensity and belief, Garde’s team started to take the game to Arsenal. Gestede’s glancing header drifted wide, Scott Sinclair should have done better with another headed chance – he was totally unmarked inside the six-yard box – and Leandro Bacuna curled a 25-yard shot that skimmed the roof of the net. It was never going to be enough, though, and the final whistle was greeted with the boos that have become the soundtrack to Villa’s season.