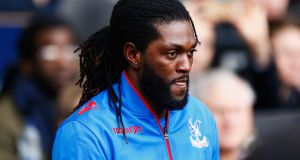 Emmanuel Adebayor has rejected claims he smoked cigarettes and asked for a shot of whisky in his coffee during a meeting with Lyon. Photo: Getty Images

Emmanuel Adebayor has rejected claims he smoked cigarettes and asked for a shot of whiskey in his coffee during a meeting with Lyon over a potential move to the French club.

Adebayor, who was released by Crystal Palace in the summer after his contract expired, met Lyon’s manager, Bruno Génésio, last week to discuss a move to the Ligue 1 side. The 32-year-old Togo international said the transfer fell through after Lyon were reluctant to release him for the Africa Cup of Nations in January, although reports in France stated that Génésio decided against signing the former Arsenal, Manchester City and Tottenham striker because of a series of bizarre requests during their meeting, including providing a private helicopter to take him to training, hiring celebrated chef Joël Robuchon as his personal cook and a villa with a swimming pool that “has a view of Corsica”.

“We had a place in our squad for Manu, so I arranged to meet him for a coffee in Lyon,” Geneseo is reported to have said by spoof website Football France. “But, to my surprise, when he arrived he asked for a shot of whiskey in his coffee. He also had a cigarette hanging out of his mouth.”

The quotes were picked up by several newspapers in the United Kingdom and Europe but Adebayor released a statement on Thursday to deny the story, adding that the journalist responsible will make a full apology.

“Usually I do not comment on any transfer negotiations or speculation but this time certain matters need to be cleared up,” said Adebayor.

“Lyon wanted to sign me and offered to pay for a private jet from Togo to bring me to Lyon in order for me to sign ahead of their game against Marseille. The contract was all agreed and I was merely flying in to complete a medical and sign the paperwork.

“Unfortunately I could not get there in time to be registered for their game and they signed another young striker instead. They still asked if I could come and speak to the manager and director of football in order to establish if it would be possible to sign us both.

“We all had a perfectly amicable meeting in Lyon but the coach felt it was not fair on the young player’s development to sign us both and I felt I would not get the requisite game time I needed to make this opportunity worthwhile.

“For the avoidance of doubt I only drank water at this meeting and did not ask for whiskey or have a cigarette.”

1 St Michael’s conveyor belt showing no signs of slowing down
2 Welcome to Iten in Kenya – home of champions and cheats
3 Glasgow slam European door shut on Munster
4 McFarland reflects on a job well done
5 Premiership Rugby confirms Saracens will be relegated
Real news has value SUBSCRIBE
Crossword Get access to over 6,000 interactive crosswords