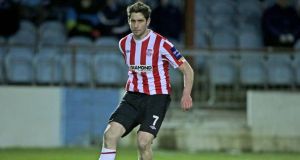 Derry City can join St Patrick’s Athletic at the top of the Premier Division table this evening if they can beat Dundalk at the Brandywell where a four-goal winning margin would put the Northerners’ noses fractionally ahead of their Dublin rivals.

A point further back, Sligo can also make progress on the leaders with a win in Cork but Ian Baraclough is missing Aaron Greene, Danny Ventre and Raffaele Cretaro due to injuries. Anthony Elding returns from suspension while David McMillan is available after signing and with Danny North’s return to fitness the manager has plenty of attacking options.

Tommy Dunne has a new signing of his own in Ciarán Kilduff but doubts about Gearoid Morrissey and Daryl Kavanagh come on top of a long list of injury problems.

Eamon Zayed is unlikely to feature for Shamrock Rovers given his international clearance must come through but Jason McGuinness is back from injury as Trevor Croly and his men head to the Carlisle Grounds to face Bray who have Dave Webster suspended but Gary Dempsey is available again.

Conversion tactics: making the most of unused space in your home
Here is your handy guide to sport on television this week