What does Liverpool’s Champions League exit mean for the club? 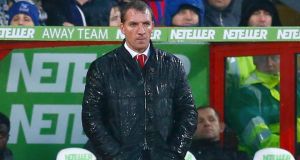 1 Brendan Rodgers is under renewed scrutiny The feedback was clear and correct after Liverpool’s miserable defeat at Crystal Palace on November 23rd: Fenway Sports Group, the club’s owners, retained absolute faith in the man named the LMA Manager of the Year only six months previously, he was their appointment for the long term and Rodgers’ position was not up for discussion.

The team has since gone five games without defeat but that tentative step forward offers no consolation the day after elimination from the group stage of the Champions League. Rather than confirm Rodgers’ optimistic claim that he has witnessed Champions League quality from Liverpool’s players this season, the Basel performance raised more questions over their pedigree. And the manager’s ability to inspire the appropriate reaction for a must-win game on the biggest stage.Rodgers’ demeanour was downbeat at Monday’s pre-match press conference and the lack of urgency, spirit and belief from his side - never mind their lack of quality – was alarming from the outset against the Swiss champions. When a Liverpool team can only rouse itself for the closing moments of a game that has their Champions League status on the line, scrutiny leads back to the manager’s door. The pressure will be immense on Rodgers should Liverpool be cut further adrift of fourth place after their next two Premier League games - away at Manchester United and home to Arsenal - or fail to reach the Capital One Cup semi-final at the expense of Bournemouth next Wednesday.

2 The manager needs to instil clear direction in his team and quickly Early in his Anfield reign Rodgers was asked if he would ever abandon his managerial principles and revert to desperate, long-ball tactics to chase a result. “If plan A doesn’t work, plan B is to make a change to make plan A more effective,” he replied. Anfield, where Jose Mourinho was once mocked for throwing John Terry up front for the final minutes of a Champions League semi-final, witnessed Martin Skrtel joining a Liverpool attack without a recognised striker for the closing stages against Basel on Tuesday. There is nothing wrong with pragmatism - indeed, Rodgers tweaked his philosophy to the benefit of both Luis Suarez and Daniel Sturridge last season - but Liverpool were lost in a fog of their own making against Paulo Sousa’s team. The manager’s back-to-basics approach was necessary after the Palace defeat, steadying results and offering a platform for battered confidence to return gradually, but safety first was a confusing way to approach a must-win Champions League game. It resulted in a team short on self-belief making an inhibited start and allowed Basel space to pass their way around Liverpool’s deep central midfield. With only Raheem Sterling providing pace up front, the starting lineup showed Rodgers is still searching for a system suited to the different options at his disposal this season.

3 Doubt increases over Steven Gerrard’s future at Anfield Gerrard cut a despairing figure when the referee Bjorn Kuipers called time on Liverpool’s brief and thoroughly underwhelming return to the Champions League on Tuesday. Only the Liverpool captain knows what was going through his mind as he dropped to the pitch and stared impassively into the middle distance, but the thought that this may prove his final Champions League appearance for his boyhood club would not have stretched the imagination.

Barring a Premier League transformation and top-four finish that appears beyond this group of players at present, it could be 2016-17 before Gerrard might have a chance to return to the European elite with Liverpool. He would be 36 by then. As always, the captain gave everything in pursuit of a Champions League reprieve and generated Liverpool’s only hope with the exquisite 81st-minute equaliser against Basel. But it was not enough and Gerrard does not have enough quality around him to share responsibility.

Liverpool’s own argument for convincing Gerrard to sign the contract extension they have put before him has diminished.

4 The onus has increased on Liverpool’s modest summer signings Around GBP94m worth of signings started on the bench for Liverpool on Tuesday, providing another indication that the transfer market does not guarantee a solution to the problems confronting Rodgers. Even if there was the finance and intent to address several weaknesses in the January window - a goalkeeper and a defensive midfielder for a start - the loss of Champions League status, for this season and possibly beyond, does not enhance Liverpool’s attractiveness in a notoriously difficult market. Continued weakness in attack, with Rickie Lambert hauled off after 45 minutes against Basel and no striker on the bench as Rodgers overlooks the claims of Fabio Borini, increases the likelihood of Liverpool attempting to bring Divock Origi’s arrival date from Lille forward to January. Otherwise, answers must come from within. Daniel Sturridge is scheduled to be fit early next month but his fitness record is not encouraging, while Lazar Markovic showed more in his 15-minute cameo against Basel than he had produced previously for Liverpool. That must be sustained for Rodgers and Liverpool to turn their campaign around.

5 Old Trafford will crave an opportunity for revenge Liverpool not only strengthened their title prospects with a 3-0 win at Manchester United in March, but intensified the pressure on a beleaguered opposition manager and pushed their fierce rivals further out of the reckoning for Champions League qualification. How quickly fortunes fluctuate in football. United can return the compliment on Sunday. Guardian Service