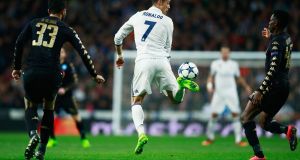 It was fun and there is more to come. Ninety minutes, four goals, more chances and an important lead for Real Madrid to take to Italy: that was the balance from an enjoyable night at the Bernabéu where the hosts came from a goal behind to defeat Napoli 3-1.

The first chance came after just 20 seconds, the first goal after seven minutes, superbly curled in by Lorenzo Insigne, followed by strikes from Karim Benzema, Toni Kroos and Casemiro. Until the last minute this felt open. It still is, in fact. Next stop, San Paolo.

Maurizio Sarri had insisted that his team would attack Madrid, even if to do so was “madness”. He said: “The only thing I won’t accept is a fearful performance.” He did not get one, and that felt like something to be grateful for, but nor did he get the result he sought.

Zinedine Zidane did not either, but by the end he could be happy with what he had seen and there was generous applause from all around the ground at the final whistle. Sarri always knew that defeat was possible. “If we lose,” he said, “well, it was against the best team in the world”.

“United, we’re unbeatable,” declared the banner hung among the travelling Napoli fans. They might be united but they were not alone; there was talk of 10,000 Italians here, about 4,000 of them with tickets, and they were heard as often as their hosts.

They were soon revealed by the first roar of the night, located not just in the north-eastern corner but dotted all around, although it was Madrid who had nearly taken the lead just 20 seconds in, Pepe Reina reaching out his right hand to stop Benzema’s shot from seven yards.

The ball had arrived just behind him and he had taken the shot on with his left foot, but the chance was a good one, made on the left by Cristiano Ronaldo, though the Italians were not cowed. When Napoli went forward, and they were not shy to do so, they travelled with pace and intent.

Five minutes in, this was already looking like it would be very open and a lot of fun. That sensation never went away; in fact, it grew. All the more so when Napoli took the lead in the eighth minute thanks to a spectacular strike.

Marek Hamsik delivered the through-ball, but Lorenzo Insigne decided not to let it run all the way, hitting it first time instead, from 40 yards. Usually, shots from that distance go over the goalkeeper. This did not; this bent round Keylor Navas and into the corner. Navas may have been out of position but the finish was superb and Insigne raced to the other end of the stadium.

The pass had made its way through the centre circle and it was a path that Napoli sought to embark upon often. They had a lot of the ball, although the final pass did not always materialise, as runners headed up both wings. In the opening 20 minutes Madrid combined less but made more, their momentum building.

Benzema had three headers in six minutes, the third of them levelling up the score 10 minutes after the opener. Ronaldo provided the first cross, James Rodríguez the second and Dani Carvajal the third, the ball curled in superbly with the outside of his boot for Benzema to power past Reina, the noise deafening.

Madrid were moving, not satisfied with being level. Soon the balance had tilted their way, as they sought the goal that would give them a lead they judged they needed. Zinedine Zidane had said that it would be vital not to concede; Insigne’s goal obliged them to seek more, and they did.

Ronaldo, just inside the area, thumped over from Luka Modric’s lovely threaded pass. Then, just before half-time, he escaped on the right and bent a neat ball to Benzema, running through the middle. The Frenchman reached it, but Reina was almost as quick, heading off his line to close the angle and deflect the shot off the post.

It didn’t take long for Madrid to take the lead once the second half began. On 49 minutes, Ronaldo constructed a goal for Toni Kroos, dribbling deep into the area from the right, reaching the byline alongside the six-yard box. There, he stopped, looked and waited, pulling the ball back for the German to guide the ball into the net.

Madrid wanted more, and quickly got it. The pressure was applied and the pressure brought it – the ball looping out to beyond the edge of the area where Casemiro sent a stunning diagonal volley dipping and flying 25 yards into the far corner.

Five minutes had passed between the two goals. A decent, if dangerous lead, had become a significant one, but this was not over and Napoli could regret Dries Merten’s miss, hitting high from close range, unmarked and central, after José Callejón’s cushioned setup.

With Napoli pushing and Madrid protecting as the game entered the last 10 minutes, the ball did find its way into Navas’s net for a second time only for the flag to go up. The chance was neatly made, Amadou Diawara’s delivery headed back across by Insigne for Callejón to nudge over the line, but offside. Napoli had been brave but they had been beaten.