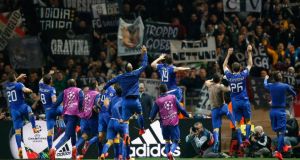 Juventus players celebrate with their supporters after they reach the last four of the Champion League following a 0-0 draw away to Monaco. Photograph: Afp

Those from Barcelona to Bayern Munich via Madrid will not be quaking in their boots just yet, but Juvenuts are back where they believe they belong. This was not the performance of an elite contender, Juventus labouring throughout to quell the threat posed by AS Monaco in the Principality, but history will remember it as effective. Massimiliano Allegri’s side emerged from a squeeze of a contest and have reached a first Champions League semi-final in 12 years.

Italian football should similarly rejoice in their progress, Serie A having waited five years for representation in the last four of the European Cup, and this streetwise side will test whoever awaits ahead. This was an examination of their resilience rather than flamboyance, canny competitors ultimately succeeding in drawing the locals’ sting with at least half of those crammed into the arena urging them on. By the end the Monegasques had rather run out of ideas. They departed the competition after a campaign forged on solidity. Against the Italians they had desperately needed an incisive spark to have any real chance.

This tie had always felt destined to prove painfully tight, even with Juve’s narrow advantage having been established in Turin courtesy of Arturo Vidal’s penalty. Both sides had stressed the need for patience in the buildup, the Italians ever eager to pounce on any uncharacteristic defensive vulnerability displayed by French football’s stingiest back-line while the hosts sought to summon urgency without leaving themselves prone to the counterattack. Leonardo Jardim’s team had warmed to their task impressively, the muscular Geoffrey Kondogbia wresting control of central midfield in front of the onlooking Didier Deschamps, often collecting deep but marauding forward with menace. Had his team boasted any real bite in the six-yard box, they would have forced parity early in the contest.

The young France midfielder had driven them on like a man possessed, dumping Andrea Pirlo unceremoniously on the turf as he stole back possession to set the tone, then volleying marginally wide before testing Gianluigi Buffon more accurately from distance. The visitors’ three-man rearguard appeared nervy, Giorgio Chiellini enduring one of his more jittery displays having been booked inside the first minute for pawing the ball back from Joao Moutinho after slipping. When the centre-half and Vidal clumsily sandwiched Kondogbia as he barged passage into the penalty area the locals bellowed for a penalty. There was disbelief at its non-award.

It was not the only pang of anxiety endured by the Italians in that first period. Bernardo Silva had proved pesky down Monaco’s right flank, combining slickly with Jeremy Toulalan and Moutinho to reach the by-line as Chiellini stumbled in his aftermath, with Andrea Barzagli instinctively deflecting the pull-back behind. Jardim paced his technical area in frustration, ever conscious that the visitors would surely exorcise such slackness. Quite whether he would have been impressed to see Kondogbia and Andrea Raggi swap shirts with Pirlo and Carlos Tevez as the teams retired at the break was doubtful.

That gesture certainly suggested reverence that the visitors’ performance up to then had hardly merited. Aside from a solitary effort spat just wide by Tevez seconds before the interval, and one sumptuous Pirlo pass inside Layvin Kurzawa amid plenty of misplaced offerings, Juve had offered little with which to be satisfied. They had been the sloppier of the teams, their display unbecoming of a side 15 points clear at the top of Serie A with a domestic cup final still to come. The stomach bug that had hampered Tevez earlier in the day only partly explained the fact the entire team appeared rather off-colour.

They confronted Dimitar Berbatov, flung on for the hamstrung Toulalan, upon the resumption – the Bulgarian a more languid kind of threat alongside Anthony Martial, but a presence nevertheless – with Moutinho swiftly flinging over a dangerous centre that was missed by Buffon for Patrice Evra to hack clear before Aymen Abdennour could prod home. The veteran goalkeeper was more assured in darting to the edge of the area to deny Berbatov time on the ball after it deflected kindly into his path off Leonardo Bonucci. The locals massed behind that goal wailed in collective exasperation.

If anything, Monaco were guilty of over-elaborating in their dominance, the concern always that Juve would prove more ruthless when their own opportunities were eked out. Álvaro Morata, liberated by a Pirlo pass from deep as Juve heaved to repel a corner, should have spied Tevez better positioned and free to his right on one rapid counter-attack. His reward was to be substituted for Fernando Llorente, though the Italians’ ambition had long since been to hold what they had. Pirlo clipped the woodwork with an outrageous free-kick but, more significantly, this young Monaco side could find no way through.