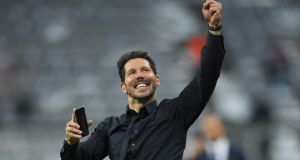 Atletico Madrid boss Diego Simeone celebrates in front of the Spanish team’s supporters at the Allianz Arena after they claimed a place in the Champions League final by knocking out Bayern Munich. Photograph: Matthias Hangst/Bongarts/Getty Images

Atletico Madrid boss Diego Simeone hailed the “huge mettle” of his team as they booked a place in the Champions League final at the expense of Bayern Munich.

Bayern won 2-1 on aggregate in Bavaria but Antoine Griezmann’s strike for the Spanish side took them through to the final on the away goals rule after they won the first leg 1-0.

Simeone told his club’s official website afterwards: “It was a fantastic first half from Bayern. Then, we saw a formidable team and had little response to the situations they proposed.

“The second half was more even. We went out very well in the counter-attack that resulted in the goal and that allowed us to have an advantage.”

Thomas Müller missed a spot-kick for the hosts before Fernando Torres did likewise for Atletico and Simeone said: “A missed penalty always implies several things.

“Their penalty would have put them 2-0 ahead and made things very difficult for us. And later, with eight minutes to go until the end, it would have turned things around.

“But the boys showed huge mettle at the end of the match. We go through to the final very happy.”

Bayern boss Pep Guardiola saw his team maintain their winning run at home in the Champions League thanks to goals from Xabi Alonso and Robert Lewandowski but was disappointed to see his team exit at the semi-final stage again.

The Manchester City-bound Spaniard told his club’s official website: “I gave my life for this team, I fought and did my best.

“We played as we wanted to play today but we came up one goal short. I’m sorry, especially for the players.”

Defender Philipp Lahm added: “Atletico punished us on the break. We tried everything but unfortunately it wasn’t enough.

“It’s bitter to be knocked out after a game like that. We can still finish the season celebrating. It’s a pity we haven’t rewarded ourselves and the coach for the last three years.”

The German giants’ lead at the top of the Bundesliga is five points with only two games of the season remaining and they are also in the final of the DFB Pokal.