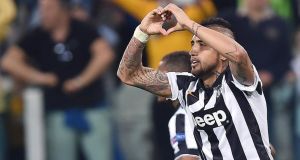 Juventus midfielder Arturo Vidal smashed home a second-half penalty to earn a 1-0 win at home to Monaco in an absorbing Champions League quarter-final first leg on Tuesday, leaving the tie on a knife-edge.

Vidal, who has missed two penalties this season, held his nerve and fired into the roof of the net in the 57th minute after Ricardo Carvalho bundled over Alvaro Morata, who had been sent clear by Andrea Pirlo’s lofted through ball.

Juventus coach Massimiliano Allegri, whose side faced a Monaco team that had conceded only four goals in eight previous games in the competition, had predicted that the match could be boring but it was completely the opposite.

Although Italian champions Juve dominated possession, Monaco were always a threat on the break and forced Gianluigi Buffon into three top-class saves to deny them an away goal ahead of the second leg on April 22nd. Carlos Tevez and Vidal missed excellent openings for a jittery Juventus in the first half and the hosts were lucky to reach the break without conceding a goal.

Yannick Ferreira-Carrasco should have given Monaco the lead when he shot weakly at Buffon and the Belgian had another effort turned away by the veteran keeper shortly afterwards.

Juve playmaker Andrea Pirlo was thrown into the fray for his first match after a seven-week injury layoff and the risk paid off as he set up the winning goal by lofting a pinpoint ball over the defence for Morata.

Carvalho clipped the striker right on the edge of the area and Czech referee Pavel Kralovec hesitated slightly, possibly consulting the goal line assistant, before pointing to the spot and booking the Portuguese defender before Vidal fired home.

Juventus still had another escape to come when Buffon tipped over a rasping Geoffrey Kondogbia drive after the hosts lost possession in midfield. They will be more than happy to travel to the French principality with a clean sheet from the first leg.