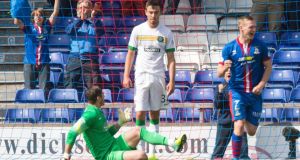 An own goal edged a spirited Inverness past Celtic 1-0 in the Highland capital.

The deciding moment the match came in the 65th minute when Marley Watkins got away down the right side and fired in a cross which goalkeeper Lukasz Zaluska could only parry.

The ball rebounded straight off young Irish defender Eoghan O’Connell, who was helpless as Inverness netted, claiming their first home victory over the Glasgow giants since May 2011.

Dundee United returned to winning ways thanks to substitute Chris Erskine’s late winner pin the 2-1 victory over Ross County, who are still looking for their first point of the campaign.

Derek Adams’ County were on course to stop a run of three straight defeats after Jake Jervis’ 50th minute equaliser had cancelled out Nadir Ciftci’s first-half opener at Tannadice.

But the Highland side were left to rue another loss as Erskine capitalised on a mistake from County goalkeeper Antonio Reguero to lash home United’s crucial 87th-minute strike and give the Taysiders three wins from their opening four games in the wake of losing 6-1 away to Celtic the previous weekend.

Goals from Robbie Muirhead and Sammy Clingan in either half secured the three points against 10 man Well.

The reverse at Rugby Park was Motherwell’s third league defeat in a row.

Hamilton won their third Premiership game in a row after snatching a dramatic 2-1 comeback victory over Partick at Firhill.

A stunning goal by Kallum Higginbotham just six minutes from time looked to have given Partick the points, but immediate responses by Hamilton substitutes Tony Andreu and Jason Scotland saw the Lanarkshire men head back along the M74 with all three points.