Serious questions to be asked of UFC on its 21st birthday

Despite celebrating 21 years, the mixed martial arts sport’s maturity is in real doubt 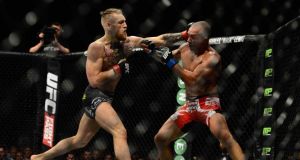 Dubliner Conor McGregor (left) has entralled the Irish public when he beat Diego Brandao of Brazil at the O2 Arena, Dublin, in a UFC fight in July. Photograph: Inpho.

On New Year’s Day 2011, Dustin Poirier made his UFC debut and began the journey towards his showdown with Conor McGregor at the MGM Grand Arena in Las Vegas this Saturday night.

That first time out on the big stage, Poirier gained a unanimous decision over another promising young featherweight named Josh Grispi. In defeat, Grispi’s career went on a different trajectory and he was released by UFC last year. Seven weeks ago, he was arrested on a litany of charges including training his pit-bull to maul his wife. A Massachusetts policeman described it as “the worst case of domestic abuse I’ve ever seen”.

In the two months that have passed since a lot of Irish people were so enthralled by the spectacle offered by McGregor and his cohorts at the O2 in Dublin, UFC fighters, past and present, have generated headlines for acts of violence against women, each incident seemingly more horrific than the last.

Thiago Silva put a gun in his ex-wife’s mouth and threatened to shoot. The mother of Anthony Johnson’s children got a restraining order after he knocked out two of her teeth. And, War Machine, also known as Jon Koppenhaver, has been charged with attempted murder following an assault on his ex-girlfriend that broke 18 bones in her face.

After his ex-wife refused to testify against him, Silva was reinstated and deemed eligible to fight, only to be cut again two weeks later after video footage emerged of him brandishing a gun at her. Johnson has been suspended indefinitely and, as the UFC is quick to point out, War Machine and Grispi were no longer with the organisation at the time of their alleged crimes.

This might be known as the WWE defence – take no responsibility for the damage your fighters inflict once they leave your house.

“There are no rules,” boasted the UFC when it unleashed itself upon the world in 1993 and that mantra became its initial selling point. While more and more regulations were incorporated as it gravitated from the fringe towards mainstream respectability and annual revenues of $500 million, a culture of lawlessness has proven more difficult to stifle.

Two years ago, Anheuser-Busch threatened to withdraw sponsorship unless the UFC addressed the rampant sexism and homophobia so prevalent around the sport.

And then there’s the steroids.

“I tried to get the Nevada State Athletic Commission to test, I made requests, ultimatums, everything,” said Tim Kennedy, a middleweight who fights on the UFC 178 undercard alongside McGregor-Poirier on Saturday. “It reached a point of no response. I just didn’t hear back. So, here I am, a week out from my fight and I could have been taking anabolic steroids during my entire camp. It’s a problem.”

Although experience has taught us to be wary of athletes protesting too much about drugs, that Kennedy was willing to underwrite the cost of testing himself and his opponent Yoel Romero, and still could find nobody to do it, sums up the UFC’s rather lax approach to performance-enhancing substances.

Earlier this year, Dana White, the charismatic president of UFC, roared and bawled at reporters who dared to suggest more needed to be done to root out the steroid cheats.

Given that ’roid rage and domestic violence are so regularly linked, reports that the UFC may finally implement just such a drug policy early next year offers hope for the future. Confronting one menace may help in the battle against another.

Before the current spate of scandals, the UFC was, ironically, making an effort to increase its female audience, and all the contestants on its latest “The Ultimate Fighter” reality show are women.

It has to find new viewers from somewhere because a vocal faction of longer-standing fans have lately grown disillusioned. After a decade of expansion, the proliferation of shows all over the world has diluted the quality of the fare on offer. The best no longer take on the best often enough, and pay-per-view sales have suffered accordingly.

The natives are getting restless too. After announcing his retirement last week, Wanderlei Silva, an icon of the sport (who on Tuesday, incidentally, was banned from fighting in Nevada for running away from a drug tester), denounced the UFC for underpaying fighters and for trying to persuade them to get in the cage when unfit. What was most interesting about the Brazilian’s statement was the amount of public support it quickly elicited from other disenchanted fighters and supporters.

For a sport turning 21 later this year, the UFC has, in a whole lot of different ways, some serious growing up to do.

1 Seán Moran: It won’t take much before cancelling All-Ireland looks like a solution
2 Bundini Brown: The man who invented ‘float like a butterfly, sting like a bee’
3 Atalanta hope to bring joy to Bergamo after city’s darkest hour
4 Covid-19: Barcelona’s Todibo confirms he is player to test positive
5 Trump tips Wilson to win as O’Sullivan sees off Williams
Real news has value SUBSCRIBE
Here is your handy guide to sport on television this week