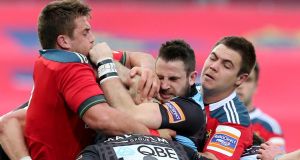 This week having finally finished it, I left Cormac McCarthy’s The Road behind and delved into Max Hastings’ Catastrophe where I quickly bumped into Marcus Tullius Cicero; the causes of events are more important than the events themselves! What would Cicero think of Eddie O’Sullivan’s resurrection in Biarritz not to mention Munster travelling to Glasgow and Ulster to Dublin? Emotions are a key player in all three events.

Relegation may have caused the events that have thankfully promoted O’Sullivan back into head coaching one of the most important clubs in European rugby, especially as their first ever foreign head coach. And, what has caused the events that have pitted Munster into a battle royale tonight? Glasgow have won their last eight Rabo matches playing superb counter attack rugby that will punish Munster’s error strewn game.

Eddie O’Sullivan
I’ve been amazed at how our sports mad country at times conveniently forgets that elite sport and especially professional sport is all about success. What definition we put on success is a question I’ve been asking lately, but suffice to say in professional rugby it is to win.

With winning in mind I’m amazed how long O’Sullivan has been out of the highest echelons in favour of less qualified personnel in the art of winning. Add to that the lack of interviews. Why? It appears that those charged with these decisions are doing so with emotions uppermost – “we don’t want him”.

Professional sport has taught me that emotion has an ever decreasing role to play in outcomes. George Gregan famously noted in RWC 2003 that passion had no part to play in the modern game. A few days later Australia knocked the All Blacks out of another World Cup with Gregan saying “Four more years . . . four more years” to his opposite man Byron Kelleher. When former Wallabies questioned him he simply replied, “Nothing was pent up, mate, we were beating the All Blacks in a World Cup semi-final, that’s all.”

It’s coming up on four years since his role with USA Rugby and O’Sullivan finally got interviews with Munster and Biarritz. That Anthony Foley explored the option of O’Sullivan indicates his understanding that professional sport is not about emotions but success and clearly O’Sullivan represented that to him.

Massive club
The challenges facing O’Sullivan are huge – a massive club in the wrong division and ageing legends. The more I understand of the French rugby model, the more I conclude it is based on phenomenal rugby athletes thrown together to win all their home games, the odd away game, getting to the play-offs and taking their chances.

This is not the Irish way; primarily because we don’t have that volume of athlete in our ranks. Hence we have to create them, manage them and most importantly develop them as individuals and within the team.

As a result our academies are miles ahead of the French equivalent. Our team structures are even more so. This may seem strange considering how often France beat Ireland but it is true. For Ireland to win there is enormous depths of analysis completed on the opposition, the referee and themselves. There are structures and game plans to expose that analysis and when it works, it’s great.

O’Sullivan has been at the forefront of this concept which for many in France will seem alien, even strange. It will undoubtedly be his biggest challenge – to convince Biarritz that their way is in the dark ages.

Pro 12 semi-finals
Rob Penney has mentioned the “emotional attachment” of his players to each fixture. In the eighth minute last weekend Damien Varley threw into an attacking Munster lineout just outside Ulster’s 22. Due to the conditions, and possibly Ulster’s familiarity, Munster cleverly shortened the lineout. The intended target Paddy Butler sprung high but the ball sailed over him. A lady behind me immediately shouted abuse at . . .Varley! However as Butler propelled into the air his prop David Kilcoyne lifted in front and the crucial lift behind was missing. Hence Butler lost two feet in height – where the ball was.

Whether this is an emotional attachment issue or not, this is a massive breakdown in process and it is far from where Munster pride themselves in lineout execution. The throw looked good (in terrible conditions) but the systems failed.

This is especially so in general backline play where the degree of accuracy against Ulster, Connacht and particularly Glasgow has been very poor. The abject loss to Glasgow was especially costly putting the Scots into a home semi-final.

In fact when the emotional attachment is ebbing away, unlike George Gregan, Munster tend to dip drastically in performance. Hence, their often lack of winning streaks.

The good news for tonight, is that Munster will undoubtedly bring the correct level of emotion for their needs and hence will perform– but it’s a huge task. So a real challenge for Foley next year is how to get Munster performing consistently when they are not emotionally charged.

The flip side is true for Ulster. It is when they become too emotional they tend to stray off path. Although Ulster’s discipline has been amazing all season Jared Payne is one example of what might happen when emotion slips. Ulster, with icons Johann Muller and John Afoa moving on, not to mention the bridesmaid tag, will potentially make this an emotional RDS affair (not to mention Leo Cullen and Brian O’Driscoll).