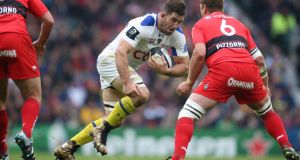 Jamie Cudmore in his eye-catching footwear in the Champions Cup final against Toulon. Photograph: Billy Stickland/Inpho 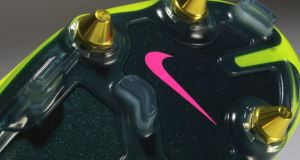 The sole of a hybrid soccer boot. These screw-in studs are illegal in rugby.”

Clermont lock Jamie Cudmore drew some attention in the build-up to the European Rugby Champions Cup final for his choice of footwear. Laced high above the ankle and tiger-striped in black and gold, even in today’s neon-booted world these cleats stood out as something quite different.

“The boots are actually an American Football model,” Cudmore told The Irish Times.

“I tried them out a few times – they looked a bit ridiculous and I got a few laughs around the training shed – but to be honest, they’re outstanding. They’re super light and they’ve got a great stud pattern, which really helps me in all positions – pushing in the scrums and mauls and what have you.”

It’s an odd beast, the ‘Under Armour Highlight’. Josh Rattet, the company’s head of team footwear, said they’d looked at the American football concept of “spatting”; taping over the boot and around the ankle. While he stressed that the boot was not a substitute for taping an ankle for medical reasons, he said many gridiron players did it as much out of ritual rather than need.

The Highlight was developed to mimic that “locked-in feel”. Cudmore’s team-mate Julien Bardy is also wearing the boot.

Cudmore’s his innovation doesn’t end there. The big lock said he was having trouble getting the traction he wanted with the soleplate of some of Under Armour’s recent models. The solution? A custom boot with a ‘Nitro’ soleplate, said Cudmore.

That soleplate pattern wouldn’t have been legal until World Rugby changed the long-standing regulation that had banned the toe stud. The line “there shall not be a stud/cleat at the toe of the boot” has now been removed from World Rugby’s regulations after the successful trial of the Adidas FF80.

Awareness is an issue. Ben Lovell, of online sports outlet Lovell Rugby, said they still get calls from parents saying their child has been forbidden by a referee from wearing the FF80 due to that front stud.

Michael Patz, RFU match official development manager, said he’d sent out a memo on this point in March because they were getting similar queries from officials, players and parents.

With the restrictions on stud configurations now lifted, Patz said “the officials, when they do a stud check before a match, are primarily looking for anything that might be sharp or abrasive”.

Cudmore likes the extra traction and doesn’t view that single front stud as being a problem – “there’s not really much rucking any more”. He views the gradual creep of tiny soccer studs into the game as being far more dangerous. “I’d much rather get a sprig in the head because you probably get a bruise as opposed to being sliced open like a little razor.”

Wayne Rooney is among those who have been sliced open by hybrid boots (a mixture of screw in studs and plastic blades) and Gordon Taylor of the English Professional Footballers’ Association has called for a Kitemark safety standard.

While blades are legal in rugby provided they’re not sharp, but many of Nike’s newer soft ground boots come with very pointed studs indeed. Too pointed for rugby, in fact.

Multiple rugby unions, including the IRFU, have sent emails to their various refereeing levels reminding officials to be on the lookout for the Nike studs which are perhaps half the legal minimum diameter of 10mm at the tip.

A sales assistant in Elverys, Dún Laoghaire, said local referees had pointed out to them that the studs were illegal for rugby. She said she tells rugby-playing purchasers they’ll need to buy a set of proper rugby studs. A simple solution, but it’s only simple if you know about it.

Lovell said he recognises the issue with the Nike studs but said they’d like to see consistency through the various levels of the game.

“If they’re being worn in the Six Nations – on BBC or Sky – why should it be any different in an under-14s match on a Sunday?”

Again it’s about awareness. While those at the professional level should know better, and spare studs should be easily sourced on match day, at the amateur level it might not be so straightforward.

Picture that team of 13 year olds arriving with five players wearing boots with the illegal studs. There are no spare studs, no substitute players. What is a referee to do? Turn a blind eye, risking injury, or tell those kids there’s no game today? A difficult situation.

It shouldn’t take an injury for this to get sorted out.

Athletics Ireland confirm seven sessions for National Championships 17:23
Trump prefers Jordan to James because ‘he wasn’t political’ 16:45
Mark Selby books semi-final spot after crisis of confidence 13:09
Galgorm Castle resort could rescue 2020 Irish Open 11:25
Iain Henderson out for up to 10 weeks after hip surgery 10:26
Crossword Get access to over 6,000 interactive crosswords