Robbie Henshaw looking forward to linking up with Garry Ringrose 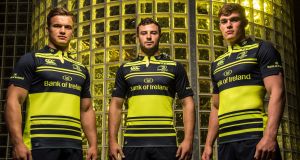 Canterbury has revealed the new Leinster alternate jersey to be worn away from home throughout the 2016/17 season. Photograph: Paul Mohan/Sportsfile

There may only be 19 months between Henshaw and Ringrose - who has swapped Ben Te’o for Robbie - but one of them has 22 caps the other, for now, zero.

“I would like to link up with him, 12 or 13, whatever,” said Henshaw at Leinster’s Canterbury alternative jersey launch. “He is a class player. Serious talent. I am looking forward to learning from him and giving him some experience. It is all positive.”

Despite rehabbing a serious knee injury, Henshaw’s demeanour radiates positivity. Graham Henry’s all too brief fortnight with Leinster brought into sharp focus how essential that trait is for any athlete seeking existence at the elite end of their sport.

“He was very similar to Pat (Lam) and very similar to Joe (Schmidt). I thought the whole mental side of the game, your mental preparation, was really fascinating. It is an area of the sport that has grown bigger and bigger. Just being in that mental mindset where you are ready for what’s coming against you.

“When he had the All Blacks he based a lot of his success around his backroom staff and obviously his group of players but the mental psychologist he had in there got them to that next level.”

Gilbert Enoka’s story has been told before. On April 1st the NZRU made the boy raised in an orphanage, now an officer of the New Zealand Order of Merit, their full-time master of mental skills.

Wayne Smith came across Enoka selling PE gear in 2000 and quickly introduced him to the All Blacks squad. A lasting bond was not long established with Henry and Steve Hansen. The never ending Brad Thorn said, if not for Enoka, New Zealand would have buckled under the strain of hosting the World Cup in 2011.

Enoka has links to Gazing Performance Systems, a British company that was initially set up to help sales companies, whose clients include the England RFU.

The secret is “blue head thinking.”

“The brain is made up of three parts: instinct, emotion and thinking,”

Enoka told the media in November 2014. “What often happens under pressure is that the thinking shuts down so you are relying on emotion and instinct. That in turn means you can no longer pick up the cues and information to make good decisions.”

To climb away from “red-head” thinking Thorn would spray water on his face, Richie McCaw would stamp his feet and so on. Triggers. There is also a no dickheads policy. But that is not always possible.

“I use our psychologist in the international set-up,” Henshaw continued. “I think I’ll end up going for more (of that) outside myself. Going more down the line of it.”

This seems a little strange considering the sight of Henshaw the teenager, he’s 23 now, adapting almost instantly on arrival into the professional game.

“Coming in I didn’t have any mental training or psychology work. I just kind of went with the flow kept my head down as a young fella, just tried to do what I did back in school and bring that on into professional rugby.

“It got me a long way starting off at 15, got me a lot of space. I don’t know, just ended up playing well. Never really looked back.

“Then coming into my first international camp I definitely used Enda (McNulty). You could see the transition. The step needed. It is not enough, what you do in provincial weeks, there is a lot more work.”

“Definitely that’s where I needed Enda to be more switched on for international games.”

McNulty is no Gilbert but Enoka is no Enda either. A blue head is a blue head nonetheless.

The recovery time from knee surgery, following his injury in the second Springboks test last June, is 12 to 16 weeks. That makes a Leinster debut for the opening Champions Cup weekend a possibility and keeps him on course to face Enoka’s boys in Soldier Field, Chicago on November 5th.

Also, for the foreseeable, he’s not a fullback anymore.

“12, 13. I would like to play a bit of both. Keep my options open. I enjoyed 13 against South Africa, enjoyed the space there.

“I just want to get back playing. It’s a number of the back really. I know 15, down the line maybe when I get fit, when my lung capacity gets better. There is a lot more running for the fullback jersey so 12 or 13 at the moment. Wherever they see me.”