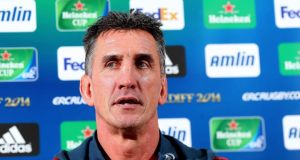 Munster head coach Rob Penney said securing a home Heineken Cup quarter-final was “massive” for his team after they coasted to a 38-6 bonus-point win over Edinburgh at Thomond Park.

Having led 12-6 at the break, Penney’s charges went on to dominate the second half with tries from Conor Murray, captain Peter O’Mahony — allied to closing scores from Simon Zebo and Felix Jones — ensuring they will host a last-eight date in Limerick in early April. Penney said he was pleased for Munster’s supporters that their 15th quarter-final appearance in 16 seasons would be at at Thomond Park.

It was only confirmed later that it would be against four-time champions Toulouse.

“As a cauldron it is a very difficult place for any team to come and play. To have that opportunity to play one more European Cup game on our home ground is great — wonderful reward for the lads’ efforts.”

Penney was admittedly pleased with the manner in which his side refused to get distracted by the fact they knew a bonus-point victory was what was required before today’s round six clash with the Scots.

“We were really focused on getting the job done in a really professional way, which was a great sign. You shouldn’t underestimate Edinburgh for a start. But I was really excited about the potential for us to get Edinburgh on a firm track and the proof is in the pudding.

“Knowing what was needed beforehand could have been a distraction. It is a great credit to the lads that they just went about their task and focused on being in one moment at a time and just doing the job.

“It is very easy to get anxious if the points are not coming when you know a bonus-point win is what is required to get a special outcome. It was nice for us to know as a group. The one pleasing thing is that we did not get distracted by it.”

Meanwhile, Edinburgh boss Alan Solomons said the sin-binning of their flanker Cornell du Preez on the stroke of half-time was a major moment in the game. “That was a big decision. That had a major influence at that particular point,” insisted Solomons, whose side were hoping to win through to the Amlin Challenge Cup quarter-finals. “

Munster got a try (from Conor Murray) coming out of half-time which put them up 19-6. Then the game starts to get beyond you and later on again we had another yellow card (for Geoff Cross) which made it very, very difficult.

“Munster are a good team and when you make mistakes and you turn over ball or are down to 14 men, they are going to take advantage.