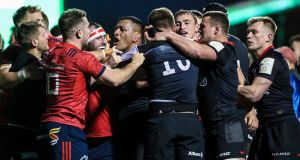 Munster team doctor Jamie Kearns will serve a three-week touchline for his role in the 30-man brawl which was sparked during the province’s 15-6 defeat to Saracens on December 14th.

Kearns was alleged to have verbally abused Saracens and England hooker Jamie George about his weight during the second-half at Allianz Park, which led to a melee involving both sides.

And on Tuesday European Rugby released a statement confirming Kearns would be sanctioned for the incident against the defending European Champions, after an independent committee heard a misconduct complaint against him.

“The independent panel found that, during the match at Allianz Park on Saturday 14 December, Dr Kearns verbally abused the Saracens player, Jamie George, and that in doing so, Dr Kearns breached the EPCR Disciplinary Rules.

“The independent Disciplinary Committee took into account the immediate expression of remorse shown by Dr Kearns and determined that he serve a three-week touchline ban, suspended for a period of 12 months and pay a fine of €2,000 (due immediately).

“Both Dr Kearns and EPCR have the right to appeal the decision.”

Meanwhile Sale director of rugby Steve Diamond has been given a “formal reprimand” for comments he made about referee Mathieu Raynal and his assistants in the wake of the Sharks’ 20-22 home defeat to Exeter in the Champions Cup on December 8th.

“The independent panel found that, during his post-match duties following the match at the AJ Bell Stadium on Sunday 8 December, Steve Diamond made comments that had the effect of insulting the match officials, and that these comments had the potential to bring the sport of rugby union, the Heineken Champions Cup, and/or EPCR, into disrepute.

“The independent Disciplinary Committee took into account Steve Diamond’s timely admission of wrongdoing, in addition to his numerous subsequent public comments and apologies to the team of Match Officials for any offence caused.

“They determined that Steve Diamond be given a formal reprimand and fined him €3,000 (payable immediately).

“Both Steve Diamond and EPCR have the right to appeal the decision.”

1 America at Large: On Long Island, longing for a return to our field of dreams
2 ‘For 25 minutes I ran out of oxygen’: Pepe Reina on his coronavirus battle
3 ‘This is sick’ - seventh-tier Swedish club cancels friendly after betting mayhem
4 Garry Ringrose to stay with Leinster as he signs two-year central contract
5 Kevin Mitchell: Hard to figure out why it took so long to cancel Wimbledon
Real news has value SUBSCRIBE