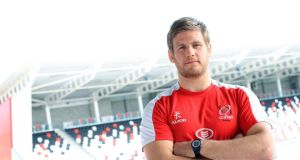 Chris Henry has been named among the Ulster replacements. Photo: Darren Kidd/Inpho

Chris Henry has been cleared by his surgeon for full participation in Friday night’s Pro12 encounter with Cardiff Blues as head coach Neil Doak has named him among the replacements.

Henry suffered a mini-stroke prior to Ireland’s November International clash with South Africa, consequently undergoing heart surgery to repair a defect in his heart wall.

Ulster Rugby have said that they are “delighted” to reveal that after two months of having his involvement steadily increased with the squad Henry has successfully completed his recovery.

In a statement released on Friday the province say that “following a consultation with his surgeon in Dublin this week he has been cleared for full participation.”

Ulster Head Coach Neil Doak says that Henry’s recovery and involvement has given all involved a massive boost.

“He is a very popular member of the squad and he has worked extremely hard since his surgery to get back to full fitness,” says Doak.

“While he was cleared to play earlier in the week, we wanted to wait until today to confirm his involvement, so that he could be completely focused on his return to play.

“Wearing the Ulster jersey means a great deal to Chris and I know with what he has been through over the past four months that tonight will be extra special for him.

“I also know that the crowd will give him a huge reception if and when he takes to the pitch. For the coaches and players of Ulster Rugby, it is just great to have him back.”