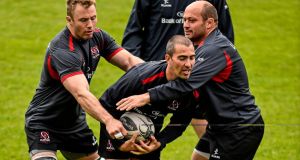 Ulster have made 11 changes for the Pro12 semi-final. Photo: Russell Pritchard/Inpho

Ulster have welcomed back 11 players who did not feature in last weekend’s defeat against Glasgow, for their Pro12 semi-final against the same oppositon in the same venue.

Head coach Neil Doak can call upon 10 international players who sat out the 32-10 defeat for Friday night’s encounter at Scotstoun (kick off 7.45pm).

Jared Payne and Darren Cave are paired in midfield, with Paddy Jackson named at outhalf and Springbok, Ruan Pienaar, coming back in at scrumhalf.

Up front, captain Rory Best, is joined by Emerging Ireland props Callum Black and Lutton in the front row.

Rob Herring, who was cleared of illegal stamping by a Pro12 disciplinary committee on Thursday night and is selected as a replacement.

Townsend says he’s expecting “a big challenge facing one of the best sides in Europe for the second time in a week and it’s knock-out rugby now so we know what’s at stake.

“We’ve had some epic battles with Ulster over the last few seasons and they’ll be eager to reverse the scoreline from last week.

“Tomorrow we expect to be playing in front of another sell-out crowd at Scotstoun for a place in another final and everyone at the club is really looking forward to the match.”

Liverpool could seal title win at Anfield when they host Crystal Palace 20:43
Lifting the lockdown: what does it mean for sport? 19:33
GAA club matches to return on July 31st with intercounty games in October 19:13
Betting shops face uncertain future as they prepare for Monday reopening 18:53
Ghaiyyath blazes a trail to take Coronation Cup at Newmarket 16:27
Here is your handy guide to sport on television this week