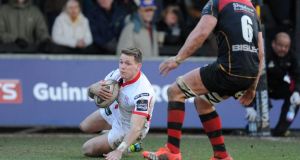 Ulster Head Coach Neil Doak told his side their bid for a home semi-final will fade away if they do not put right their shock 26-22 defeat at the Newport Gwent Dragons.

Craig Gilroy’s brace was cancelled out by scores from Rhys Buckley, Jonathan Evans and Carl Meyer, and by the time Ross Adair had crashed over, it was too late.

The Pro12 high-flyers actually moved ahead of provincial rivals Munster and into second-place after they salvaged the losing bonus-point.

Doak said: “We have to make sure we’re accurate and disciplined moving forward and we can’t afford any slip-ups.

“All the Irish sides lost away to Welsh opposition this weekend, so all four provinces will be disappointed with their week’s work.

“The problem is now that we have a week off and we can’t correct it.

“We have five cup finals from now until the end of the season with five teams up there.”

Neil Doak’s side were made to pay for an early missed opportunity when Prydie booted the Welsh region into the lead 10 minutes after Ulster handled at a ruck.

The early strike sparked the Irishmen into action and Gilroy got the try he deserved from their very next attack.

The ball was delivered off the top of a lineout and a block from Darren Cave on Ashley Smith allowed Humphreys to send Rory Scholes clean through.

The winger streaked towards the Dragons line and found Gilroy running the same supporting line, and all he had to do was dive over.

But Prydie notched his second penalty to give Lyn Jones’ men a one-point advantage at half-time.

After some early wobbles with the boot, Pienaar found his rhythm to boot Ulster into the lead after the hosts were caught offside.

But the Dragons showed they had the fire in their bellies as they roared back into the ascendancy.

They showed their muscle up-front to force Ulster into bringing down a dangerous driving maul, and Callum Black was sent for 10 minutes in the sin-bin for his troubles.

They made no mistake from the resulting catch and drive, and replacement hooker Buckley was the man to crash over.

And the visitors were caught cold again from the Dragons’ next foray into their territory, when Jonathan Evans was allowed to squirm over to give his side a 13-point lead.

Gilroy was the man making it happen for Ulster, and he led the comeback charge with his second try on 70 minutes.

The jinking back was on the end of a well-timed pop-pass from Darren Cave, and Peinaar converted to cut the gap.

Gilroy was beaten by Amos before fullback Carl Meyer stretched over in the corner to wrap up the victory.

There was still time for Ulster to make for a nervy ending when Adair dived on a fly-hack through, with Pienaar converting to clinch the bonus-point.