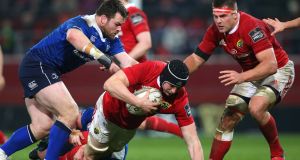 Munster supporters have had very little to cheer about this Christmas but one moment which lifted the gloom was the sight of Tommy O’Donnell running on to the pitch at Thomond Park on Sunday.

His introduction for the final quarter of the 24-7 loss to Leinster brought to an end an injury nightmare which started back in August against Wales and which destroyed his dream of playing in his first World Cup.

But the 28-year-old has put that bitter disappointment behind him and now wants to play his part away to Ulster at the weekend when Munster will be bidding to avoid losing six games in a row for the first time in the professional era.

O’Donnell knew he was in serious trouble when he was injured in the World Cup warm-up against Wales.

“When you have something sticking out the back of your hip there and you can’t move one leg from the other, you know it’s pretty serious. I’ve nothing to compare it to but it was the worst I’ve had by far,” he said.

The Tipperary native knew he was in trouble long before the extent of the injury was confirmed at University Hospital Wales.

“I landed on my knee, right underneath me, probably more than 90 degrees, and two big Welsh lads. . .came down on me and probably came down on an angle.

“From a doctor’s point of view, they were trying to establish blood supply, nerves and to get it back in, usually with a posterior dislocation there’s a break, so it should just slide in, but they gave it one or two tugs and realised the acetabulum was still intact, they were going to have to take me to anaesthetic and put it back in.

“They tried to push it back in, but you can imagine, you’ve so many muscles around there, everything locked up, your groin, your quad, everything went into spasm, so you’re not moving it, especially after a ten week pre-season, those muscles are strong and especially when they go into spasm, they’re not going to budge.”

O’Donnell said that the painful was the worst he ever endured but that the medics worked quickly on him.

“There was a couple of different types of medication given to me, so I was in la-la land; when I came back I was still in pain. But it’s amazing, to go from all that pain ... as soon as I came around from the anaesthetic it was relief.

“I could actually move it, there was a lot of bruising, but I knew it wasn’t that bad, there was no break there, that was the positive I guess.”

Missing the World Cup was difficult for a guy with nine caps but he adopted the approach that things could be a lot worse. He didn’t go to any of the matches and tried to be as philosophical as possible.

“When you’re possibly facing six to eight months out, there’s no point replaying every game. The only game that I really struggled with was probably the Argentinian game where the lads were trying hard but things weren’t going our way and obviously with the injuries, that’s that one game where you felt, ‘God, I could have been in there’.

The slow road to recovery began but he has defied expectations and came on for his 102th appearance for Munster on Sunday night, a couple of months ahead of schedule.

“It’s good to be back and in with the lads. Probably the toughest part in recent weeks in sitting in meetings and knowing that you’re not able to contribute. In the coming weeks I’ll be able to get back into hopefully the kind of form I was in and help the lads and contribute as much as I can.”

He also signed a new three-year deal earlier this month with the province.

“It’s been my run of bad luck that I’ve been injured when negotiating contracts, but it was a vote of confidence for me in Munster and for Munster in me, to get it done, I’m very happy to have it renewed and I’m looking forward to the three years,” added O’Donnell.

Meanwhile, Ian Keatley is set to return this weekend but coach Anthony Foley has a number of injury concerns, with Irish lock Donnacha Ryan the latest to join the casualty list with a knee injury.

Loosehead James Cronin is out of the game with an ankle injury while Conor Murray, a late withdrawal from that game with a troublesome hip problem, will be monitored during the week. Foley said Keith Earls had got the all-clear from a neck injury suffered against Leinster and will be assessed during the week.

Foley said they were never in the hunt to sign Ian Madigan from Leinster.

“We weren’t in the shake up at all around that. I would have spoken to the lad, I’d have known the lad but everything we were told was he was going to Bordeaux.”