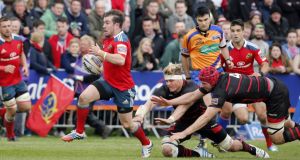 Munster’s JJ Hanrahan makes a break with ball in hand during the fixture against Edinburgh in Scotland. Hanrahan enjoyed a perfect kicking display in an easy victory for the province. Photograph: Robert Perry/Inpho

Munster may have travelled to the Scottish capital with more modest ambitions but in running up a seven-try total and with it the sought-after bonus point, the Thomond Park men have kept up the pressure on second-placed Glasgow in the race to secure a home semi-final in the RaboBank Pro 12 play-offs.

The situation is finely balanced. Munster play Ulster this weekend at Thomond Park while Glasgow are at home to Zebre. Were Munster to win at home with a bonus point and Glasgow fail to achieve a four-try tally then it would be Munster, by dint of their much better points difference, who would have the home semi-final.

Surprise points tally
Munster’s head coach, Rob Penney, however, is not pinning his hopes on such a scenario. “Glasgow are not going to let that slip. They’re a quality side, and we’ve got a tough one against Ulster,” said Penney, nevertheless hugely encouraged by the margin of victory over Edinburgh.

“We never expected to win by that amount, especially on the back of last week and the fact that we had to travel back from Marseilles. We didn’t get back until five in the morning. And then we had a six-day turnaround and then extra travel in coming to Edinburgh.

“I’m just so proud of them. They kept at it. The performance was indicative of the calibre of the guys we’ve got in the squad. But ultimately we had a bit more to play for than Edinburgh. They ran out of steam and we managed to put a good score together” said Penney.

Edinburgh’s performance suggested an end-of-season mentality but that could not detract from what at times was a dazzling display by Munster, characterised by the interplay between backs and forwards, crisp and accurate handling and the ability to play with pace

Munster showed their intent to play an open running game in the early stages of the match with an attack triggered by Simon Zebo’s run from his own 22m area. But despite a threatening start by Munster it was Edinburgh who claimed the game’s first try, scored by outside half Carl Bezuidenhout from breaks by Jack Cuthbert and Matt Scott.

Breaking point
Greig Laidlaw, playing his final home game for Edinburgh, missed the conversion kick. But at the other end JJ Hanrahan was on target with a penalty kick at goal.

It was clear Munster were not depending on penalty goals for their points and showed their ambition with handling that stretched the Edinburgh defence to breaking point, allowing Johne Murphy to make ground before Andrew Conway hit a clever line of running to finish the move.

Hanrahan added the extra points but Edinburgh, too, showed their willingness to run the ball; their reward, a try by Scotland “project” prop Wilem Nel from good approach work by Cuthbert, Scott and replacement Sam Beard, enhanced by Laidlaw’s conversion.

Edinburgh’s lead was short-lived, however, as Hanrahan kicked a second penalty goal and then just on half-time Munster grabbed their second try of the match with Denis Hurley having a clear run to the line. Hanrahan’s conversion goal gave the visitors a 20-12 interval advantage.

If Munster had looked in charge just before half time, then the visitors confirmed their dominance in the second half as first replacement hooker Damien Varley took the plaudits for a forward effort and then as their front boys won a penalty try from a five-metre scrum.

Careless Edinburgh
Hanrahan converted both scores before completing a perfect kicking display by adding the extras to a try by lively scrumhalf replacement Duncan Williams after Edinburgh’s defence had been over-hospitable to their guests.

Edinburgh’s plight became almost pitiable when second row Grant Gilchrist was yellow-carded for illegally preventing a try in the corner resulting in a second penalty try.

This time Conor Murray converted and the scrumhalf had a further chance to show his kicking prowess with a touchline conversion of Munster’s seventh try, scored by the impressive open side Tommy O’Donnell, to complete a comprehensive rout.