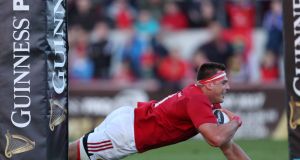 Munster’s CJ Stander scores one of his two tries as his team ran out easy winners against Zebre at Thomond Park in the Guinness Pro12 series. Photograph: Billy Stickland/Inpho

CJ Stander scored twice for Munster as they cruised to a bonus point victory against a lacklustre Zebre in Thomond Park, as Peter O’Mahony made his first appearance in a year.

Four first-half tries meant the bonus point was secured by the interval. Stander bagged his second, they forced a penalty try and Stephen Archer also got in on the act against the Italians. But for Rassie Erasmus, getting his captain on the park for the first time was a huge lift for the squad ahead of the clash with Leinster next week and the start of the Champions Cup the following weekend in Paris.

“Even if it wasn’t a tough run of games, to get Peter back is such a huge boost for the whole of Munster – his competitiveness his leadership,” said Erasmus. “He will take a lot of the leadership role that Billy Holland has been really doing well overall . . . It’s great to have him in the squad.”

Munster’s new director of rugby was excited by what he saw as his team preserved their perfect record at Thomond Park so far in 2016.

The last team to beat Munster in Limerick was Leinster last December, and with Leinster to come in Round 6 of the Pro12, Erasmus wants his players to enjoy and not fear the big occasions.

“We are getting there slowly. We used some opportunities last week, it was on a platter there. There was a lot of points and opportunities out there but at least the boys were trying things.

“As long as we enjoy the excitement and the competition in the background I think that’s what we are doing at this stage. I don’t want us to have this cloud over our head saying, ‘Oh this is an important game coming up.’ It doesn’t help.

There was a shock for the hosts after 21 minutes when winger Gio Venditti looked like breaking away to level matters, but Sweetnam showed incredible speed to get back and deny him. From there Munster ran riot and earned an easy win.

Chelsea get over early setback to go back top of Premier League 22:24
Robbie McDaid announces himself as the next Dublin man to come around 21:16
Dublin pick Cavan off with precision and turn it in to a procession by the end 20:46
Manchester United roar back as Rashford seals win over West Ham 19:41
Wales finally pull clear of Italy’s grip in another lacklustre display 19:22
Here is your handy guide to sport on television this week