Munster hope training unit will give performances a new edge 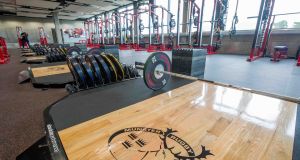 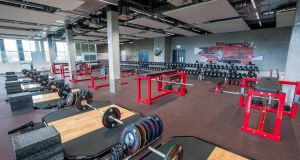 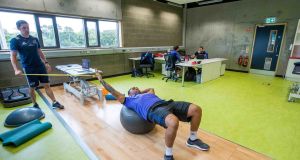 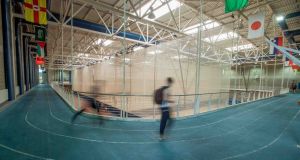 The running track in the UL facility. Photograph: Morgan Treacy/Inpho 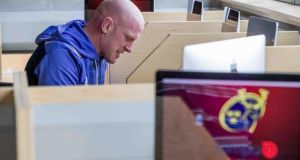 No excuses now. Munster unveiled their state-of-the-art, €15 million, purpose-built training centre at the University of Limerick yesterday and if the facilities themselves wouldn’t impress you, the positive energy would.

At the outset of the professional era, there was but an unmarked muddy green area for scrummaging, not to mention the squad being located in Limerick and Cork. Now, however, there is an all-encompassing, three-storey facility covering 220sq m (2,370sq ft) for the entire professional entity and academy, as well as the domestic game, and all attendant 120 or so staff.

All the playing squad could be facilitated, if necessary, in the 65-seater auditorium which is used for team meetings. The same goes for their new modernistic gym.

Adjoining this, there are various medical and physiotherapy treatment rooms, changing rooms for the pro and academy squads, a kitchen, various offices and an indoor training centre which encompasses four basketball courts and is the width of a rugby pitch, which is overlooked by an upstairs 220m running track.

As well as the existing outdoor pitch, one of the four 4G pitches is reserved for rugby. UL will also complete the construction of a 25m diving pool alongside its 50m swimming pool by January.

The latter accounts for €9.5 million of UL’s overall investment, with the cost of Munster’s purpose-built High Performance Centre being €5.5 million, all paid for by UL, which fended off rival interest from the CIT and LIT to have Munster as its flagship tenant.

“But we’ve entered into a 15-year lease agreement with the university to make the repayments on it. Obviously we were renting two premises already and our initial desire was to be cost-neutral on what we were repaying on the two centres, and with the additional add-on of the extra space we put into the building that is where the commercial board came in to assist us.”

Rassie Erasmus is a lucky man, given how all his predecessors (since Declan Kidney won the Heineken Cup twice) bemoaned how Munster were split into two centres.

“I’m not sure how possible that would be in the modern era. I am sure it would take guys of exceptional talent and character to do that and we have that character and that talent and now in the one centre.

“I think it’s things like this when you can’t compare with teams on big budgets. Things like this make a massive difference and it will drive the players, the coaches and the management to higher standards.”

He was echoing Fitzgerald’s remarks that Munster “are never going to be a Toulon or Racing or even Saracens”.

Erasmus revealed that the Stormers unveiled their High Performance Centre on the first day he took over there as director of rugby.

“I wish I could say that I was part of the planning for this excellent end product and compared to the Stormers one, I don’t know about the rest of the world but rugby union-wise it’s probably in the top ten in the world.”

As Erasmus said, it should also help with the recruitment of players.

Now in their third week in the centre, flanker CJ Stander said: “I don’t know about rugby league, but it’s the best base I’ve seen in rugby union anyway.

“There’s nothing like it in South Africa that I know of. I quite enjoy it, there’s a good flow to the building, a good vibe, and I think if we get used to it, there is going to be no excuses going into the future.

“In the first few days we felt like we were spoiled, everyone was quite giggly about it, but now the professionalism has come into it and we’re working well together as a team, coaches and players, because we know what this set-up means to us.”

Munster and Ireland scrumhalf Conor Murray said: “It’s everything we thought it would be and more. I still can’t get over it. I actually drive a kilometre to work and a kilometre home again in the evening, and that’s all I have to do.

“We can come here for little meetings, big meetings, you’re not driving to Cork stiff out of a car, lads aren’t coming to Limerick and vice-versa. It’s a world-class facility and it will only help us in our quest.

“We’re just getting a lot more done, it’s that simple. We’re together more often, we’re a lot closer together, people are more accessible and we can get a lot more work done.”