Munster determined to finish campaign on a high note 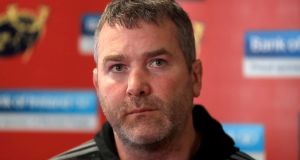 Munster coach Anhony Foley: “We need to make sure we win the game this week, otherwise we’re reliant on other people not getting results.” Photograph: Donall Farmer/Inpho

Different home venue, different away team, but same deal as last week. Despite last Friday’s welcome win over Edinburgh at Musgrave Park, Munster again host the team immediately above them in the Guinness Pro12, the Scarlets, with their participation in next season’s European Champions Cup going down to the wire.

Once more it’s win or bust time. A win copperfastens Munster’s qualification for the premier European tournament they have adorned so memorably on and off for 21 years. Even a bonus point defeat might be enough, or might not if the Ospreys scooped a five-point haul at home to Ulster. A defeat without a losing bonus point would see them miss out to the Ospreys if the Welsh outfit defeat Ulster.

Of course an Ulster win would almost seal Munster’s place regardless of their outcome, unless Edinburgh had a five-point haul at home to Cardiff, but for their own self-worth, Munster need to sign off this troubles season by securing qualification off their own bat. With the Scarlets sitting one behind Ulster and top four play-off place, their need is as acute.

“We’re in the same boat this week. We need to make sure we win the game this week, otherwise we’re reliant on other people not getting results.”

No matter what happens though, Munster will sign off their season at Thomond Park on Saturday, sooner than they would like, but with the possibility of at least doing so on a positive note. As with Ulster last Saturday in the Kingspan Stadium, it’s considerably more feasible and enjoyable to conduct a last-day lap around the pitch on the back of a win rather than a defeat.

“Everybody wants to finish with a win,” said Foley.

“That’s our preparation this week, to make sure we get that. Unfortunately there’s a crowd over in Wales that wants something else. So we’ve to make sure that we’re good about our jobs this week, coaches, senior player group, we’re all driving from within.”

“We’re all conscious that it’s week 45, there’s a lot of work gone in so far and it’s about making sure the group is fresh and energetic and ready for the task in hand because it’s going to be a high-octane game.”

Helped by an eight-day turnaround, Foley expects to be selecting from the same squad as last week, even though Frances Saili, Simon Zebo and Rory Scannell all sat out yesterday’s training.

“They’re literally bruises, so we just need to mind them. There is no point in getting a re-bleed in there, that’s just a time management thing. So hopefully they’ll all train on Thursday.”

Donnacha Ryan’s ongoing concussion issues means he is again unlikely to feature. “Donnacha hasn’t trained so he’s still on the return to play protocols and the likelihood [of him being available] would be very, very slim,”.

As to whether Ryan, who looks to be a major doubt for the tour to South Africa, might have longer-term issues, Foley said: “I’ll leave that to the medical people, it’s a doctor issue and he’s getting the best of care and a bit like anybody who goes through concussions, he’s had two on the bounce, it takes a bit longer. He’s got to be asymptomatic before he can return.”