Matt O’Connor unhappy with officials after Leinster defeat to Munster 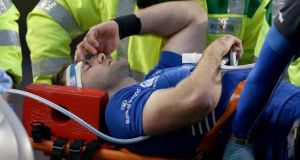 Leinster coach Matt O’Connor had little time for the officiating in his side’s 34-23 defeat to Munster at the Aviva Stadium on Saturday night.

Munster rocked Leinster early and ran in three tries before the break - through James Cronin, Robin Copeland and Ian Keatley - to lead 28-9 at half-time.

Four Munster players went to the bin in the second half as Leinster rallied and responded through a Darragh Fanning score and a penalty try, but they were kept at bay by penalties from Keatley and late replacement JJ Hanrahan.

The spate of yellow cards was “too little too late” for O’Connor.

“Well if (Munster get away) with infringing like that it makes it really, really hard,” said the Australian. “Every time we had any ascendancy with the ball, they killed the ball. You need strong officials and I don’t think we had that tonight.”

At scrum time, he added, it was a “guessathon” from Welsh referee Ian Davies, with “no clarity from the officials”.

Damien Varley was binned for lazy running and BJ Botha joined him for slowing the ball down, before Jimmy Gopperth put Darragh Fanning in for an almost inevitable try against 13 men.

Lock Dave Foley pulled down a lineout maul for a penalty try and also walked before Conor Murray followed him with seconds to go and the game beyond Leinster.

Needless to say, Munster coach Anthony Foley didn’t see it quite the same way as his Leinster counterpart.

“I need to look at Varley’s (yellow) again,” he said. “I thought Eoin Reddan threw the ball at him. That’s unsporting.

“They mauled us, got a penalty try, I saw us do the same in the first half and get nothing out of it. We battened down the hatches.”

Leinster’s Fergus McFadden will undergo a scan on a “significant lower leg injury” tomorrow (Sunday), according to O’Connor.

McFadden was stretchered off the field in the 14th minute and replaced Mick McGrath. He was clearly in a lot of pain when leaving the pitch and Ireland coach Joe Schmidt, as well as O’Connor, will anxiously await the prognosis.

As for Jack McGrath, who was withdrawn from the starting XV prior to kick off, Leinster “erred in the side of caution”.

Rob Kearney was dropped to the bench at the last minute after apparently sustaining a back injury in the warm-up, but he will be “fine for next week”, after replacing Brendan Macken in the 47th minute.

1 Serpentine stays on from the front to steal Epsom Derby for Aidan O’Brien
2 Monica Seles: The warrior queen who could have been the best ever
3 Séamus Power huffs and puffs as Wolff blows the door down in Detroit
4 Glorious Greenwood as Man United thrash Bournemouth
5 Matt Williams: Six Nations must recognise the desire for revolution outside Europe
Real news has value SUBSCRIBE