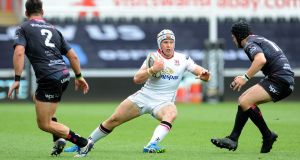 Luke Marshall is set to return for Ulster against Treviso on Saturday. Photograph: Inpho

Ulster look set to have centre Luke Marshall back in their match-day squad for Saturday’s trip to Treviso as the northern province aim to rack-up two wins from two following last Friday’s bonus point opener over the Dragons.

Marshall, who featured for Ireland in two Tests against South Africa in June, is believed to be poised for a return though may not be in the starting line-up to take on the Italians.

Ulster are also hoping that new signing Rodney Ah You will be in the mix again after the former Connacht prop suffering a concussion in the pre-season win over Northampton Saints. Ah You’s fitness would certainly ease Kiss’s pressing issues over the lack of fit tight-head props in the squad with Georgian short-term signing Anton Peikrishvili not having arrived yet.

Doubts remain, though, over winger Craig Gilroy and scrum-half Paul Marshall who both picked up knocks against the Dragons with Gilroy suffering a suspected concussion and Marshall shipping a rib injury.

Meanwhile, it is also believed that Ireland international Jared Payne, who as a frontline member of the national squad has not featured yet this season, may be a another addition to Ulster’s lengthy injury list due to a recently sustained leg injury.

Though Ulster are the only Irish province to never have lost a Pro12 game at Treviso, assistant coach Neil Doak was having none of any suggestions that this looks like another nailed-on bonus point win for Kiss’s squad.

“If you look at Treviso’s opening game at Leinster, it wasn’t until late on that Leinster got away from them and that’s why they can be dangerous and why it’s absolutely key we start well over there and give ourselves a platform to play off,” said Doak.

“Going away from home is about the mindset. It’s about not being afraid and getting into the game early.

“We know they’re dangerous and we can’t give them access to their lineout our their maul,” he added rebutting any notions that another hefty win, as was the case last January when Ulster played there, is on the cards.