Liam Toland: Developing continuity is name of the game 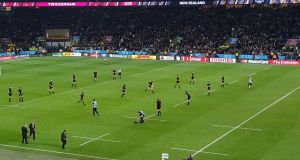 The All Blacks doing their lateral passing drill at half-time in the World Cup final. Instead of a cerebral chat in the dressing room they practised this key skill at speed.

At half -time in the RWC Final New Zealand came out early. The score stood in their favour 16-3. Why did they come out early in the biggest game on the planet? They simply formed into three lines of five players, oscillating between their 22 and 10 metre lines, practised at speed their lateral passing.

This habit had been noted as the last act of their warm up throughout the tournament but now; instead of cerebral chats in the half-time dressing room they elected for lateral passing. Continuity?

As mentioned some weeks back, when taking an underage training session in Old Crescent I enquired what they’d like to do. To a man (boy) they wished for ‘rucking and tackling’ so I did continuity! Yes, they were confused too. So in a premeditated routine I surveyed the group of U-13s searching for the perfect player to make my point.

My eyes alighted on the short and chubby player; the most likely prop. Using the old army methodology of ‘pose, pause, pounce’ I asked the group “what are your positions”. Pausing a moment so my question sank in, I focused on the above kid and pounced on him for an answer. While his team-mates giggled he meekly informed me that he was a prop.

Why did I pounce on him and why did they giggle? Because already typecasting at its best had begun! They had him typecast as a classic old school prop, soon to become scrummager and master of the dark arts; but nothing else. I then posed the question how often do you train. The young prop told me three times per week about 90 minutes a session. He then confirmed a match each weekend of about an hour. That’s five and half hours.

Then I asked him; “how often do you touch the ball in a match?” Again his mates giggled. After a short pause he confirmed twice. I then asked him how long he held the ball on each touch; “two seconds” he answered suspiciously. Feeling his embarrassment I explained to him that in any given week he dedicates 5½ hours to rugby and touches the ball twice for a total of four seconds during the match (that’s four seconds from 19,800 seconds of rugby per week). How often are your players contributing to the ball?

Hence my goal, through development of individual and team continuity, would make those four seconds the best four seconds of his life. And over time these two touches would last longer and multiply into several touches every match. For the first time in his extremely young career he saw the possibility of rugby being a game with a ball.

Who knows where this young talented player is going? Should that be in the Munster Academy years hence he may even break through into the Munster senior ranks and on into the Irish team? Why not? But how many young players have been typecast away from the ball at such a young age and become afraid of it?

I enquired of Felipe Contepomi pitch side during the RWC and he confirmed that a wave of enthusiasm around the ball has exploded in Argentina. Yes, but they have the sun and we have the winter rain. This week the Great AK reminded me, in the rain, how we have the best facilities, wonderful coaches, skilled players, superb fitness and nutritionists not to mention a myriad of other advantages; but it rains.

For many, like our legends Brian O’Driscoll and Gordon D’Arcy, the ball was a natural extension of themselves, hail, rain or snow. How many of our greats have had illustrious careers where the ball was incidental or a necessary evil? When Willie Anderson came into our lives the impact he made was enormous. It was from him I heard the word ‘continuity’.

And like the young Old Crescent prop above, many of us were perplexed. Thankfully Willie didn’t use the pose, pause and pounce method but he had many methods for progressing us along. Tackle bags had a role but no longer were we to run into them. “Why would you run into such a target? he’d ask. He taught us to put the tackler in a weak position (like Ma’a Nonu on Kurtley Beale) and take advantage by targeting his weak shoulder. The Argentines are especially good around the narrow channels of heavy traffic and we practised this every single day. So how is it all done? Firstly everyone can make a difference.

Victor Costello, who had multiple caps at this point, was transformed under this system. For the first time, a management acknowledged that he had an Olympic shot put hand off, could run 100 metres in a little over ten seconds and could do 20 odd chin ups; he was an athletic freak. To this point multiple coaches focused on his aerobic capacity and insisted he simply pick from the base of the scrum, which admittedly he was very good at.

But under the new system of continuity he maximised those backrow moves and was also put out in midfield off first phase play; either as a carrier or horrific decoy. He caused carnage. However, this was the first time in his entire career that he was asked to run full throttle, in the midfield heavy traffic and expected to catch a 15 metre pass on the gain line; not easy.

Much more detail next week with good news; you don’t have to be an O’Driscoll or a Costello to add huge value to the ball; even in the rain!

PS Congrats Reggie Corrigan on the launch of his new book this week Leinster in the beginning.