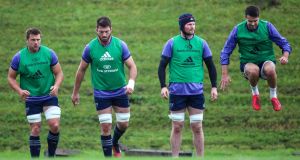 Rassie Erasmus has named his matchday 23 for Munster’s Pro12 encounter against Newport Gwent Dragons in Rodney Parade on Saturday evening.

In making six personnel changes to the side that were beaten by Cardiff Blues last week, returning internationals Conor Murray and Keith Earls are both named in the starting XV. While Ireland colleagues Donnacha Ryan and CJ Stander also make their first starts of the season.

The side includes a number of new combinations with Jean Kleyn and Donnacha Ryan packing down in the second row, Conor Murray and Tyler Bleyendaal in the half-backs, and Dan Goggin and Keith Earls in the midfield partnership, all starting alongside each other for the first time.

It’s a case of as you were in the front row with James Cronin, Niall Scannell and John Ryan starting together for the third successive round. Last week’s back three of Ronan O’Mahony, Darren Sweetnam and Andrew Conway also remain in situ.

Colm O’Shea has been named among the replacements and is in line to make his first appearance for the province if sprung from the bench.