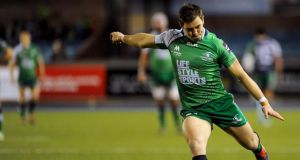 Connacht were forced to swallow the most bitter pill of defeat last evening when the Cardiff Blues stole this Pro 12 fixture eight minutes into injury time.

Connacht looked to have wrapped up the game with a 17-11 lead, but they were forced to endure an agonising eight minutes of extra time which was only concluded when Argentine Joaquin Tuculet exploited the stretched Connacht defence to grab his second try, and fullback Rhys Patchell converted for a one-point win.

Pat Lam’s squad looked to have secured only their second victory over the Blues in 11 fixtures to consolidate their hold on the vital sixth place qualification spot, but when referee Lloyd Linton produced a yellow card to Mick Kearny and awarded the home side three successive penalties deep in injury time, Connacht’s resistance was finally breached after the Blues last stand of multiple phases.

A losing bonus point is of no consolation for Connacht who will feel this game was nicked at the death, particularly having fought back with an Aly Muldowney try, which Ronaldson converted in the 70th minute

Connacht, superior at the set piece, had made it count with Jake Heenan claimed the touchdown from a driving maul and Ronaldson had added the conversion for a 7-0 lead after six minutes.

Both sides looked to play open rugby on the hard 4G surface, and both were guilty of losing the ball too easily in a lively,but often scrappy opening 20 minutes. However it was the visitors who had the most effective weapon up front, and when their maul forced the concession of another three-pointer, Ronaldson converted for a 10-0 lead after 22 minutes.

However Connacht allowed the Blues to get back into the contest, and Rhys Patchell, playing at fullback, stroked the sideline kick through the uprights to open their scoring after 25 minutes. Another penalty enabled the hosts to gain a foothold in the contest, but Connacht’s defence always kept the Blues in check.

In contrast Connacht came close on several occasions, and were left to rue their failure to convert domination into points, while some poor kicking handed the hosts the initiative after the interval, but once again Connacht’s defensive line held out until Cuthbert looked to have waltzed in, but it was overruled by TMO for obstruction.

It was a huge let off for the visitors until Cuthbert provided the impetus to the home side with a superb line break. Although it took a try-saving tackle from Matt Healy to stop him five metres out, the Blues had their tails up an eventually Argentine international Joaquin Tuculet crossed in the corner for deserved try, with Patchell’s attempted touchline conversion shaving the uprights.

With just two points in it, the home side looked the superior outfit, and they backed themselves to take the lead with a penalty to touch on 62 minutes. Although Connacht stymied their drive, they gave away another penalty an Pathcell put the Blues into the lead for the first time in the contest after 64 minutes. Not for the first time this season have Connacht showed their resolve, and on 70 minutes Muldowney claimed what looked like a winning try.

However the dramatic conclusion to this Pro 12 fixture turned the game on the its head and Connacht have left the door ajar for the chasing Scarlets in pursuit of Champions Cup rugby next season.

Different Strokes: Glass half full for Shane Lowry after best Masters finish to date 06:00
Rhys McClenaghan: ‘It would be almost silly not to aim for gold every time’ 06:00
Owen Doyle: IRFU should be encouraging representation for Irish referees 06:00
Béibhinn Parsons keen to do more than just wing it for Ireland 06:00
Brighton edge towards safety after stalemate with depleted Everton 22:31
Here is your handy guide to sport on television this week