Anthony Foley looks for consistency to continue against Ospreys 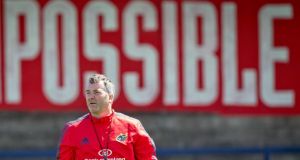 It may not be the fortress of old but Anthony Foley will gladly take Thomond Park and all it brings on Saturday.

He projects that wise, calm Munster exterior in the sure knowledge they will bring a thunderstorm to Ospreys’ ball-handling game.

A good post-Six Nations run and a squad trip to Lanzarote played its part in Munster’s late-season revival but at this delicate, pressurised stage it’s difficult to draw a smile from the Munster coach.

“We lost five games across the season and two of them were in the first few weeks,” he says. “From that point on, we’ve been pretty consistent. We’d a tough Christmas, a lot of games away from home during that period and we dropped a few points around that.

“Since the Six Nations to now, we’ve been pretty good. The one blemish has been Ospreys away and the two draws [to Scarlets and Ulster], but they were away and are bonus results in one respect.”

When Munster lost 26-12 to the Ospreys in early March there was no Paul O’Connell, or Conor Murray, no Simon Zebo and no Peter O’Mahony.

“You’re never fully there after one season,” Foley says. “It’s a building process with recruitment. We’re obviously recruiting this year and players will come and go.

“The coaches are a year wiser . . . Obviously, you make mistakes and there’s errors along the way. But it’s how you react and how you manage them. We’ve done that well.”

As Foley explains, it would have been easy for them to collectively drop the head after Saracens put them out of Europe. But he believes things have slowly turned their way, with the semi-final now getting a bigger billing than normal.

Normally Europe is still in play until late May and the focus traditionally rests there. But the Pro12 has been given a clean canvas for the playoffs to paint their own end-of-season drama without distractions, the European Champions Cup having returned to France once more.

It was after the Saracens knock that the squad took their trip to Spain. “It was something that could have easily been put on the shelves after being knocked out of Europe,” says Foley. “But the club’s focus was kicking on and making sure we’d the best preparation possible going into the latter stages of the season.

That spirit will be required against a skilful Ospreys. Coach Steve Tandy, a former Neath and Ospreys flanker, spoke of Munster’s ability to suffocate teams like theirs, who play ball and run. But Foley is also aware of Munster’s failures last time out.

“It was a very disappointing day,” he says. “There were issues around arriving and getting to the ground late, around getting on to the pitch and all that. People didn’t go through the right routines.

“The stuff we could control was that we were eight penalties down at half-time. We were struggling in certain aspects of the game with discipline being one of the major ones.”

If Foley says it, it’s true, but it doesn’t sound like Munster. His fortune is they now have a chance to fix those things. This time Thomond Park should play a part.

1 Andy Farrell ticking all the boxes in advance of England showdown
2 Players impressed with Bono’s Irish pride and desire
3 Ireland wary of Peyper calling the tune as they head for Twickenham
4 David Brady says he has witnessed the illegal payments of GAA managers
5 Owen Doyle: Day of the jackal may be coming to an end
Real news has value SUBSCRIBE