Keane and Connacht gutted as Cheetahs pounce for late win 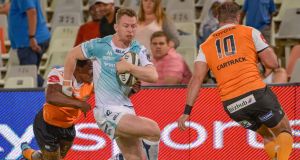 Connacht’s Matt Healy scores a try despite the efforts of Craig Barry and Niel Marais of the Cheetahs during the Guinness PRO14 clash at the Toyota Stadium in Bloemfontein. Photograph: Frikkie Kapp/Backpage Pix/Inpho

No excuses and none given. Kieran Keane’s Connacht suffered a “gut-wrenching” last-minute defeat in Bloemfontein that sees the qualification gap widening in the Pro14 table.

A win was within Connacht’s grasp until the home side wrested control in the final few minutes. The visitors may well question a sequence of questionable and confusing refereeing decisions. Ultimately it led to the Cheetahs posting a 79th minute penalty to maintain their push for a semi-final place, while Connacht took no consolation from a bonus point.

“We have to take this,” says Keane. “There is a lesson or two in there, and there is some difficult stuff we will have to deal with. I am not happy to lose.

“We didn’t come here to make up the numbers. We came here to give our best and do our best, and probably for 95 per cent of the time we did, and then we lost in the last few minutes. It is gut-wrenching for everybody to come this far and fall on that hurdle.”

Connacht surprised the South Africans with their cohesiveness and ability to adapt to the conditions, wisely kicking more judiciously, but still attacking with width, while producing a superb defence.

Given that Connacht had only one third of possession after the opening quarter, a second try from man of the match Matt Healy after 20 minutes had them trailing by a single point, 13-12.

Both tries were similar in structure – the first, five minutes earlier, resulted from sterling work at the breakdown by Sean O’Brien, and with scrumhalf Caolan Blade on the wrap with Pita Ahki, Tiernan O’Halloran supplied Healy out wide. The second was an expansive attack from right to left, with the Connacht fullback again sucking in the defender.

The Cheetahs, without a win in four games, had opened with a fourth-minute try, but thereafter opted to kick their points against a well-organised defence before Carty produced a 40 metre kick to close the half. Within two minutes of the restart Carty had put Connacht ahead.

Connacht’s experienced players John Muldoon and Tom McCartney continued to lead by example, while Carty provided the impetus for the third try, spotting a mismatch in the cover, to break through for Eoin Griffin to power home.

However with a 25-16 lead after 57 minutes, Connacht let the Cheetahs back into contention. From a ruck turnover, dangerous right wing Craig Berry provided the inside ball to Sibhale Maxano, and Marais’ conversion narrowed the gap to just two. Thereafter it became a power game from the Cheetahs’ pack which Connacht repelled until the last minute.

“We had some opportunities, but we fluffed a couple to put a margin out there and make it mentally tough for them,” said Keane. “We had them on the ropes and were doing really well, and if we had nailed that, we would have won the game.

“Some of the things we did were really good – the set piece try was a cracker – but we didn’t handle the pressure terribly well, and we coughed up some ball and the Cheetahs love having the ball as we know. It was under set piece conditions, line-outs, scrums – so there are some big lessons there for us. Had we maintained the ball, I think we would have won the game.

“One thing I know about this group is that we will learn from it, and we have plenty of other games to play for, plenty of other things to aspire to, and we will just let the cards fall as they may. We are not looking forward, not looking at positions or finals, taking it one game at a time. We have had a great tour, apart from losing the game in the 79th minute, so it’s been good, good for us.”

Only Glasgow have come away this season from the Highveld with a win, and while Connacht may well feel hard done by, it has marked a significant milestone in Connacht’s growing maturity under Kieran Keane this season, with or without the winning points.

Galway keep Tipperary at arm’s length to set up repeat final against Kilkenny 17:30
Riyad Mahrez bags hat-trick as Man City high five Burnley at Etihad yet again 17:08
Adrian Meronk gets over poor start to keep lead in South Africa 16:31
Klopp furious as injuries mount and VAR decisions prove costly 16:31
Lewis Hamilton keeps the foot down in the desert to claim 98th career poll 15:43
Here is your handy guide to sport on television this week