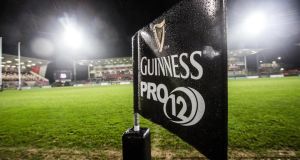 Kingpan Stadium is a fine ground now and one that has only gained in atmosphere since its redevelopment. Photograph: Inpho.

The pitfalls in selecting a final venue to a competition in advance will be all too evident on Saturday at Twickenham. Literally, the organisers of the European Champions Cup won’t be able to give away enough tickets to fill the venue.

Yet the organisers of the Guinness Pro12 have decided to break from the precedent of the previous five seasons in riskily nominating a venue for their final on Saturday, May 30th.

No doubt there are some solid reasons for doing this, and for choosing the Kingspan Stadium in Belfast as the venue for the final. For example, with the High Court in Belfast rejecting the decision to grant planning permission to the GAA to redevelop Casement Park (which was to be part of Ireland’s bid for to host the 2023 Rugby World Cup) into a 38,000-seat stadium, there is probably merit in showcasing what used to be known as Ravenhill.

For sure, the 17,000-capacity Kingspan Stadium is a fine ground now and one that has only gained in atmosphere since its redevelopment. As a city and a stadium, it would make a suitable venue for the final – particularly if Ulster are in it.

One could understand the decision to name the venue in advance if the Pro12 final were to fill out the Aviva, the Millennium Stadium or Murrayfield, and thus rival its French or English equivalent. Maybe that is the grand plan – in about a decade or two. But for the moment there is no chance of that.

Furthermore, both the French Championship final and English Premiership final are guaranteed to feature two teams from those respective countries. This is not the case in the Pro12, where teams from four different countries compete. Thus it is not beyond the bounds of possibility, for example, that the final in Belfast could yet be contested between, say, Glasgow and the Ospreys.

It would be akin to the organisers of Super Rugby deciding on a venue in advance, and thereby risk, say, an Australian-New Zealand final in South Africa. They wouldn’t be so daft of course.

However, aside from everything else, it denies any reward for finishing first over the course of the season – which is by some distance the biggest flaw in this decision.

Ulster are perhaps most deserving of being awarded the final in advance, given two seasons ago they finished top but due to the redevelopment of Ravenhill, the final was staged in the RDS as Leinster had finished second.

Last season, Glasgow finished second and as a result had to play Leinster, who had topped the regular season table, at the RDS in the final. That was entirely fair, the same as the first three seasons of the play-offs, when Leinster, Munster and Leinster again each ended up hosting the final after finishing first.

And it’s not as if the finals have been anti-climactic or lacking a sense of occasion.

None of the four RDS finals were anything less than a sell-out – with a minimum of 18,500 at each of the deciders and 26,100 at the 2011 final between Munster and Leinster at Thomond Park. What the hell was wrong with that?

If the majority of the attendance support the home team, so be it. It has been earned by the performances of their team over 22 games, with each team playing the other home and away. The cliche goes that the final table tells no lies. Well, now it does.

Were Glasgow, the current leaders, to finish first and Ulster second, with both then to ensure deserved home advantage in the semi-finals and then reach the final, Glasgow would have to travel across to Ireland for the second year running. That is grossly unfair.

Ironically, Glasgow host Ulster in the final round of matches on Saturday, May 23rd, and could know that there would be no reward for winning the match, whereas it could have been decisive in potentially earning home advantage for the final.

In any event, the potential for future anomalies remain, and the organisers have also set a dangerous precedent in another way. Presumably, all four participating countries will henceforth have to be granted the final in the future, which leads us to all manner of hard-to-sell and harder-to-fill permutations – for example a Welsh-Scottish final in Italy!

True, this coming final is already a 17,100 sell-out. But presumably Ulster supporters have been the bulk buyers and if their team doesn’t reach the final, it’s doubtful they will all attend. Alternatively if, say, Leinster, Ospreys or Munster supporters have bought hundreds or thousands of tickets in advance, what is the likelihood of them all attending? Meanwhile, supporters who might have been interested in acquiring tickets in light of their team reaching the final, may now not be able to do so.

If organisers are going to meddle in tournaments, they could at least make their tournament better. Otherwise, they should leave well enough alone.