My mate Driccy down to earth with a God-given talent 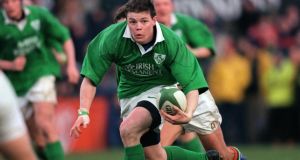 Brian O’Driscoll in action for Ireland in the 2000 Six Nations tournament, the year of his famous hat-trick of tries against France at the Stade de France in Paris. Photograph: Patrick Bolger/Inpho

In the early years of the Celtic league, on one of those magical Friday nights at Donnybrook, Leinster played Pontypridd and Brian O’Driscoll was a phenomenon.

His performance was truly breathtaking.

I remember that weekend very clearly. I went about my house in Greystones, with the growing realisation that “Driccy” could possibly be one of the best players rugby had ever seen.

Until then I had not realised it and I am sure O’Driscoll had not either.

The New South Wales Waratahs played Ireland in June 1999. It was my last game as head coach of the Waratahs and it was O’Driscoll’s first starting game in a green jersey. The Waratahs won easily.

After a decade with the Waratah organisation I have many memories of my last day, but none featured Brian O’Driscoll.

If you had of told me the Irish outside centre who played that day would develop into one of the greatest players of all time, I would not have believed you.

While at the Waratahs I had coached another great, David Campese. Campese and O’Driscoll had many similarities. Firstly, God had reached down from the heavens and touched them both. They possessed gifts that are not provided by coaches.

No coach made David Campese or Brian O’Driscoll great.

Both possessed the tenacity, grit and the sheer bloody-mindedness to develop their talents to the point of greatness. They both honed and refined their skills with a ruthless persistence.

When I took the Leinster backs for the first time in November 1999 O’Driscoll was good but not great. He was a raw talent.

Against Glasgow in 2000 at Donnybrook, right on half-time Leinster were awarded a penalty goal just inside our own half. O’Driscoll ran up to the captain, Liam Toland, and told him he could kick the required 55 metres. Even though O’Driscoll was not a goal-kicker of note, Toland agreed.

As my blood pressure rose, I watched O’Driscoll’s attempt skid along the ground, almost knee-capping a Glasgow player.

I was almost running to the changing room to give both Toland and O’Driscoll an earful. Entering the changing room I saw the long-serving Leinster team doctor, Prof Arthur Tanner, tending to Brian’s kicking foot. The toenail of the big toe was missing and his boot was full of blood.

Broke the nail
I reassessed my response. Sympathetically, I asked the 21-year-old if he broke the nail attempting the kick. He looked at me, shaking his head: “ No, I did it in the first 10 minutes, but I knew I could kick it.”

A non-kicker, with a snapped big toenail and a boot full of blood. Kids!

While we laugh about it now, it tells you about his his indomitable self-belief.

To me it was the Lions tour of 2001 that was the real catalyst in O’Driscoll’s transformation to greatness. While the scoring of three tries for Ireland in Paris in 2000 had brought him to the world’s attention, he had not yet developed the deep training ethic that would transform him from good to great.

On the 2001 Lions tour, Brian was along side Martin Johnson, Richard Hill and Martin Corry. Great professionals and prodigious workers.

O’Driscoll never liked to tell me I was right about anything. On returning from the Lions trip, he walked into my office and simply said he understood what I was talking about regarding training with intensity.

José Mourinho said “No player is born a professional. Good players learn how to become professional.” That described O’Driscoll. He was a fast learner on his endless progression towards excellence.

After the 2001 Lions tour he worked the hardest in a team of hard workers. He was the most intense in an intense group. He demanded of his peers, he demanded of the coaches. He was on the path to become Ireland’s greatest player and a great leader.

Like all good rugby men, O’Driscoll has a brilliant sense of humour.

Week’s rest
In the early 2000s after the Six Nation the players were given a week’s rest to recover. My “spies” informed me the Leinster contingent were sneaking off to New York for an unusual form of recovery.

I called them in and laid down the law about the high standards I expected from them on their return. Except for the twinkle in O’Driscoll’s eyes they all looked suitably abashed. A few day later I received a photo, of the group, with Driccy at its heart, all dressed in suits, in a classy Manhattan bar, with Cuban cigars and cocktails in hand.

Through all the intervening years I have kept in contact with him. His parents Frank and Geraldine deserve great credit. Parenting a son through what is modern day celebrity and fame must have been tough. Equally, Brian’s relationship with his wonderful wife Amy has empowered him to develop into so much more than just a very good rugby player.

Today, he is a happy, down-to-earth, well-adjusted, talented and thoroughly decent man. A son, husband, father and a good man to have as a friend.

All of us who have been privileged to have stood beside him during periods of his journey know that finishing playing for Ireland is not the end of his story.

The next part of the journey will not be played out in public, but it will be even more rewarding than his days in the green jersey. Baby daughter Sadie will see to that.

Brian O’Driscoll has given so much to rugby and to Ireland, that we can never fully repay him.

Great pride
Importantly, he has instilled great pride in the Irish nation because of his courage, extraordinary commitment to excellence and his sacrifice for his sport.

Now I hope he will take some time for himself and his family.

Enjoy watching Driccy in green, in Ireland, for the last time today, as we will never see the likes of him again.

1 Getting behind the rotten core of rugby with Dan Tuohy
2 Irish squad in the dark as clouds hang over Six Nations
3 Ryan Baird scores a hat-trick as blue wave rolls over Glasgow
4 Football fan survey: Almost half of Irish adults say they support a club
5 Matt Williams: Like on my Ryanair flight, Ireland were suffocated by England
Real news has value SUBSCRIBE