Munster can profit where Ulster came up marginally short 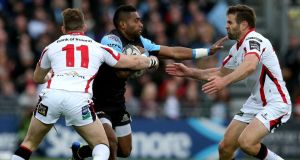 Last weekend provided lots of talking points for all three provinces and Glasgow’s Fijian right wing Nikola Matawalu was right up there. Yes many will focus on his playacting in contact; with Greg Gilroy under a high ball on 33:55 or his swan dive in Ricky Lutton’s right arm late in the day but it’s his defence that Munster must exploit.

Matawalu’s ability to read evolving attacks is extremely suspect especially two v ones. Chris Henry’s 18:51 min try is the obvious one where Matawalu is all at sea, but it’s not a one-off. Wherever Matawalu is, Munster should attack, and make him make a defensive decisions.

For instance when facing a Munster pullback decoy in midfield getting the ball wide Matawalu will rush in to smash the second last receiver where his timing is all over the place. He is so fast and powerful he acts before he thinks and here Munster need to set the trap keeping Glasgow narrow in midfield with Matawalu wide and acres to defend.

At half time Ulster having played into the wind were ahead 6-8. What could they have done to win? They exposed so much of Glasgow’s weaknesses; their lineout, their tail off lineout defence, their scrum, their lack of players in breakdown, the amount of bobbled placed balls making counter rucking with Munster feet coming through very profitable and affording good field position allied to possession.

This is far tougher throw from Brown but equally far tougher to intercept; hence the risk versus reward. The stats give Glasgow 16 wins, 2 losses and no steals but the reality is far more damming. Glasgow’s props won as much as their second rows and consequently had no platform to launch.

The irony was in winning that 16th and final lineout, sub MacArthur hit his prop Gordon Reid flat on the five-metre line and 15 phases later Glasgow score and convert; game over. Of the 15 phases that it took Glasgow to score their try watch the fourth where Matawalu circles a crazy wild offload behind his back to Vernon.

Defensively Glasgow stayed on the ground and pushed two defenders off their tail towards the ten channel but were lazy behind leaving a potential hole for Simon Zebo et al to attack.

What can Munster learn from Ulster? The second half brought Ulster jitters with kicking out on the full and crucially dropping their tempo and accuracy epitomised by a wonderful steal from Henry on an isolated Josh Strauss. Henry like any top class NO 7 recognised the advantage, pirouetted around finding Tommy Bowe coming off his blindside wing who also recognised opportunity and hunted infield.

He found Darren Cave who has three men outside him and crucially only one defender Matawalu; try time! But Cave threw a shocker behind Jared Payne’s shoulder. Matawalu in typical fashion went for the intercept but Ulster butchered a four on one; score stays 6-8 when it should be 6-15 game over.

The concern for Munster is Conor Murray’s absence as Osprey’s were also there to be taken. But Munster slowed the pace allowing Osprey’s into a game they had lost. ’Til then Keatley had his backs flying onto the ball with his superb flat lining and firing balls right out in front of his marauding team-mates.

Keatley’s tactical kicking has to be smart so too his counterattack but the key for Munster is recognising a shift in pace from Glasgow and responding to it.

The first eight scrums in Scotstoun were interesting. Three penalties to Glasgow, three to Ulster, one strike against the head for Ulster and then a kick out on the full from Ruan Pienaar. If this is too boring tomorrow watch Fijian second row Leone Nakarawa and his ridiculous ability to ride the tackle with his head up and arms free to find hard running supporters; wonderful. In the meantime Munster 2 v 1 Matawalu.

PS. I had the pleasure of the company of one Bill O’Herlihy on an Irupa round of golf some years back. As Sophocles said: “One must wait until the evening to see how splendid the day has been”.