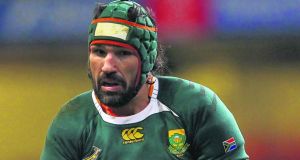 Mike Ruddock has made a number changes to his Ireland Under-20s side for tomorrow’s third place play-off at the IRB Junior World Championship.

Jack O’Donoghue has been ruled out of the game against host nation New Zealand as he continues to observe to the ‘return to play’ concussion protocols following a knock in the semi-final defeat to England.

Peadar Timmins will captain the side in his absence.

The backrow sees Timmins joined by Rory Moloney, who is named at openside flanker with Frank Taggart moving to number eight.

Dylan Donnellan and Oisin Heffernan both make their first starts of the tournament partnering Peter Dooley in the front row with Darragh Moloney named in the second row alongside Ross Molony.

Harrison Brewer is named in the centre along with Garry Ringrose.

TG4 will broadcast this game live on Friday morning (6.05am Irish time) ahead of the final.

Meanwhile, Victor Matfield will become the most-capped South African player of all time when the giant lock leads the Springboks in the second Test against Wales in Nelspruit on Saturday.

When he takes to the pitch, the 37-year-old will beak the record of 2007 World Cup-winning skipper John Smit with his 112th appearance for the side as South Africa look to wrap up the two-Test series.

And France coach Philippe Saint-Andre has recalled versatile back Hugo Bonneval and flanker Fulgence Ouedraogo to the starting side for the third and final Test against Australia in Sydney, as Les Bleus bid to avoid a series sweep.

Beaten 6-0 in Melbourne last Saturday, France have already lost the series 2-0, but have retained a strong side for the match at Sydney Football Stadium with the hope of ending a 24-year losing streak on Australian soil.