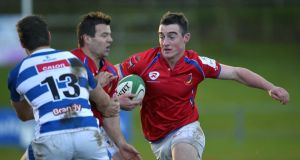 Right-wing Michael McGrath crossed for a hat-trick of tries to help Clontarf secure a bonus-point 46-28 victory over Young Munster and maintain their lead at the top of the Ulster Bank League Division One A table at Castle Avenue on Saturday.

But, apart from a spectacular try from McGrath in the opening 30 seconds which saw him run three-quarters of the length of the field, Clontarf struggled to find their form in the first half.

Indeed, the the league leaders looked vulnerable after they had flanker Brendan Cutriss yellow carded when only ahead 13-9 at the interval. But their 14 men then produced an outstanding spell which saw them move 25-9 in front within eight minutes of the restart.

Flanker Adrian D’Arcy and McGrath added tries, both of which were converted by outhalf David Joyce.

Once again, their highly regarded backrow Jack Conan was among the try scorers. Their other tries came from Josh Eden-Whaitiri, Mark Corballis and Philip Dwyer while Shaun Berne landed two conversions and a penalty.

Robbie Hudson (two) and Ian O’Neill went over for tries for St Mary’s who remain third from bottom.

UCD returned to winning form following two defeats with a 23-17 home victory over Cork Constitution. The result moved them back up to third spot in the table. James Thornton contributed 18 points with a try, two conversions, two penalties and a drop goal. Andy Boyle got the students’ other try.

Cork Con had tries from Cathal O’Flaherty and Luke Duffy.

Defending champions Lansdowne are up to fourth after trouncing bottom side Garryowen 35-10 at Dooradoyle.

They went over for five tries with Leinster prop Jack O’Connell getting two of them. The remaining Division 1A game saw Dolphin defeat Ballynahinch 25-18 at Musgrave Park with John Quill, Cian Bohane and James Kiernan scoring their tries.

In the big match in Division One B, leaders Terenure College produced an outstanding performance to demolish the previously unbeaten Corinthians 57-10 at Corinthian Park. .

They crossed for six tries with Kevin O’Neill and John Bollard getting two each.

They are now four points clear of Buccaneers who have moved into second spot after beating Blackrock College 41-22 at Stradbrook.

Other results in the division saw UL-Bohs account for Dungannon 29-13 away, Shannon beat Belfast Harlequins 13-9 at home and Dublin University pip Malone 22-20 at Sydney Parade.